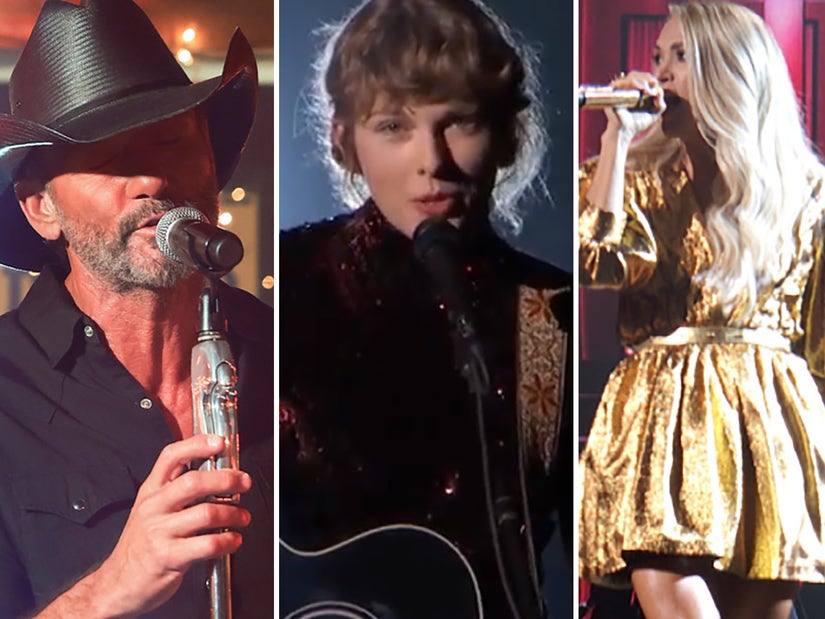 Keith Urban helmed a socially distant 55th Annual ACM Awards on Wednesday night, but that didn't stop the biggest names from country music from coming out. Plus, he hit the stage as a performer alongside P!nk to debut their new song "One Too Many."

It was a huge surprise on the night, as all eyes and thoughts were on the return of one of the genre's biggest names as Taylor Swift hit the stage for the first time in seven years for a country music show. 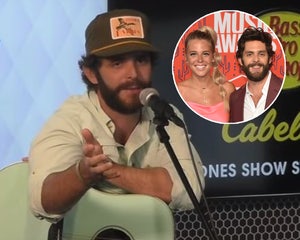 And she couldn't have picked a bigger stage to do it on, performing for the first time "Betty" from the Grand Ole Opry. Swift isn't a nominee this year, but it's possible that country music might start to look at her latest album, "folklore," for next year.

Blake Shelton and Gwen Stefani once again put their love on display with one of the night's love-infused performances, along with "American Idol" alums Gabby Barrett and Cade Foehner.

You can check out those moments, and some other highlights, below:

We'll have you, and we want you, @taylorswift13! It is so great to have Taylor back on the #ACMawards stage. Tune-in to @CBS to watch the show now! pic.twitter.com/nchgiiYzAV

For the first time anywhere, Taylor Swift performed the track "Betty" from her "folklore" album. The moment also marked her first time back on a country music show stage in seven years -- years during which she quickly became the queen of pop music.

While her latest album isn't exactly a return to her country music roots, it's indie rock vibe certainly fits better with the style than the synth-pop styles of some of her more recent chart-smashing albums.

The nine-time ACM Award winner kept it simple, just her and her guitar on a stool on the stage of the Grand Ole Opry House.

"Betty" quick got attention upon the album's surprise release, with fans speculating that Taylor was revealing the name of Ryan Reynolds and Blake Lively's baby with this one -- which she totally revealed to be true. 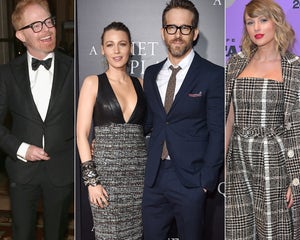 .@CarrieUnderwood brought the house down with her showstopping #ACMawards performance! Turn on @CBS now and don't miss any more of the show! pic.twitter.com/UAWPiZ0c1H

Paying tribute to 95 years of the Grand Ole Opry, the reigning queen of country music, Carrie Underwood, paid tribute to some of the legendary performers who came before her with a powerful medley of their classic hits.

She tackled Patsy Cline's "Crazy," Reba McEntire's "The Night the Lights Went Out in Georgia," Martina McBride's "A Broken Wing," and staples by Dolly Parton, Loretta Lynn and Barbara Mandrell.

"Patsy and Loretta. Martina and Barbara. Reba and Dolly. These strong voices have echoed down to me and all of the other female artists who stand on their shoulders," Carrie said of the women she was honoring. "They are some of my heroes, and I'm so honored to stand alongside them as a fellow member of the Grand Ole Opry."

It was her second time hitting the stage for a medley, having shared it at the top of the show with her fellow Entertainer of the Year nominees Luke Bryan, Eric Church, Luke Combs and Thomas Rhett for a medley of their hits, where Carrie busted out her 2005 smash "Before He Cheats."

She would go on to share Entertainer of the Year honors with Thomas Rhett. She became the first woman to win the honor three times after Garth Brooks removed himself from contention, with some fans quickly grumbling that she had to share the honor. 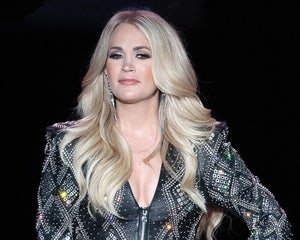 Keith Urban and P!nk took social distancing to a whole new level when they debuted their new collaboration off of Urban's upcoming "The Speed of Now: Part 1" album, due out September 18.

Coming together to perform from two completely separate cities, the pair nevertheless harmonized beautifully. Some clever camera tricks made it appear as if they might be in the same room, but realities made that more challenging than ever.

Urban spoke about those realities to open up the show, saying, "This has been an unpredictable and unsettling year for everyone. Even as of right now, our friends out west are battling horrific wildfires, our folks on the gulf coast are threatened by hurricanes. We want to send our love, thoughts and our prayers out to every one of you affected right now"

"And of course we are still in the midst of trying to fight two pandemics: COVID-19 and social injustice. Far too many lives have been lost to both," he continued. "Country music is many things to many people, but at its center, at its core, at its heart, I believe it's about community.

"The songs, the stories, and the artists that tell them bring us healing, comfort and they bring hope. We sure could use some of that right about now, don't you think?"

"Happy Anywhere" with @gwenstefani on the @ACMawards. Head to @CBS and @CBSAllAccess to make sure y’all don't miss any of the performances! #ACMawards - Team BS pic.twitter.com/r8ep6Patyi

Blake Shelton and Gwen Stefani hit the stage remotely for a performance of their duet all about being "Happy Anywhere," and they certainly looked it.

We love that Stefani is slowly sliding more and more into that traditional country look when performing with Blake, without sacrificing her own signature style. For this one, she went with white denim shorts and jacket paired with classic looking cowboy boots.

She was all country, but all Gwen Stefani at the same time. And fans need not worry, as promos for the upcoming season of "The Voice" prove that she hasn't softened the edges of her personal style in the slightest.

It's a testament to the strength of this union that both of them have been able to maintain their individuality so strongly, while still coming together to make beautiful music and prove that so long as they're together, they can be happy anywhere.

Jaw is on the floor from those @GabbyBarrett_ vocals. Turn on CBS and watch the #ACMawards now! pic.twitter.com/DIuSqmRODw

Fans couldn't get over Gabby's incredible and powerful vocals even as she sat in an intimate setting with her new husband Cade Foehner accompanying her on guitar and singing backing vocals, with baby on board -- and adorable bump on display.

The growing family was positively glowing with affection and plenty of love flying back and forth between the couple that first met when they competed together on "American Idol" in 2018.

In fact, watching their burgeoning flirt-mance turned out to be one of the highlights of that season. They were a bit of a power couple in Season 16 as well, with Cade taking fourth place and Gabby just edging him out for third.

The couple wed on October 5, 2019 and Gabby announced she was expecting a daughter with him in August. It's almost too much cuteness to handle, and yet she absolutely slayed her revenge anthem, "I Hope."

While Cade and Gabby await their new bundle of joy in early 2021, Maren Morris hit the stage just five months after giving birth to her first child with husband Ryan Hurd.

Speaking with Bobby Bones on his radio show, Maren said that she and Ryan "couldn't have asked for a more magical human to be brought into our lives during this crazy time," referring to the ongoing pandemic.

Further, she says that their son Hayes has "been a good distraction from not being able to tour."

While she may not be able to tour, Maren tore up the stage on Wednesday night. Parenthood looks and sounds great on her! 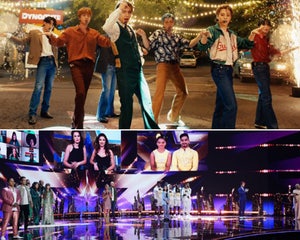 .@TheTimMcGraw always knows how to pull on our heart strings. You can stream the entire #ACMawards on @CBSAllAccess! pic.twitter.com/uF7M0XZqZ4

Tim McGraw is entering the "silver fox" phase of his life and career and fans were absolutely here for it. And if his new look didn't have the ladies swooning, well he has nothing but love for them regardless, and a strong stance of support for their rights and equality.

Fans couldn't stop commenting on his new look and silver beard as he performed "I Called Mama" from the iconic Bluebird Cafe. Afterward, he spoke passionately about women, as a man married to Faith Hill with three adult daughters.

"As a son, a husband, a proud father of three daughters, and as a human being, I am enlightened and inspired by women every single day," he said. "Their strength changes me for the better. Every opportunity in life should be available to women

Setting up a performance of "What Are You Gonna Tell Her," by Keith Urban and Mickey Guyton, he added, "This next song speaks to the questions we face while trying to create the changes that allow our daughters to be whomever they want to be."