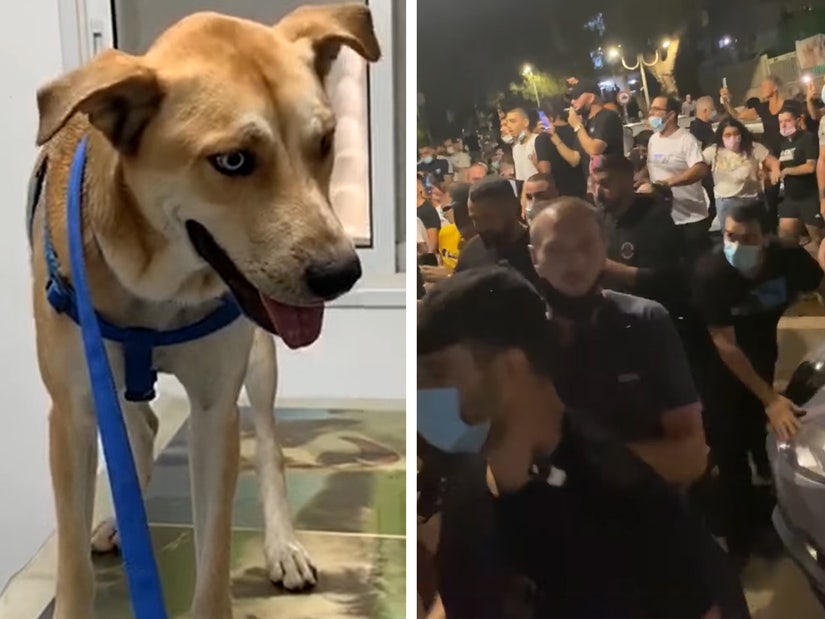 Stomach-churning videos of him allegedly beating the dog were posted online — and so was his address.

An American man had to be saved by Israeli police on Tuesday night when videos of him allegedly beating a dog were posted online — along with his address.

Videos show hundreds of furious people in a frenzied mob around his apartment, as officers just barely manage to smuggle the suspect out in one piece.

According to the Jerusalem Post the man, identified as US immigrant Alan Ross Morrison, was arrested for abusing the dog, reportedly to get back at his ex-girlfriend.

The stomach-churning videos were posted by Israeli YouTuber Dennis Charkov, who then immediately went to the man's home in Bat Yam to confront him and rescue the dog.

In one difficult-to-watch video, the suspect has tied the dog's legs together and muzzled his snout, dragging him around the floor before repeatedly punching him in the stomach, while the helpless animal yelps in pain.

In another much more satisfying video, Charkov films the moment he and two well-built friends, having somehow obtained the man's address, make their way to his apartment and confront him on his doorstep, where the dog-owner gets his turn to feel helpless and terrified, sinking to the floor with his hands raised in submission.

They berate the cowering man, but somehow resist the urge to physically take out their anger on him; however the same cannot be said of the growing crowd now gathering outside, after Charkov's videos began to spread online.

Chaotic scenes unfolded as officers arrived to arrest the suspect, as furious animal lovers follow them inside.

The three men who originally confronted the suspect are now forced to try to hold the crowd back, as they try claw their way into his apartment to get their hands on him.

Outside the apartment, video shows the incensed mob had swelled in size to hundreds, hurling objects and baying for justice for the dog, as the officers attempt to shepherd the suspect out.

Per the Post, Morrison was eventually "smuggled" through a window by police, before being  arrested and taken for questioning; Tel Aviv Magistrate's Court extended his detention by five days and ordered him to receive a psychiatric evaluation on Wednesday morning.

Through his attorney, Morrison expressed "sorrow and remorse" for his actions, according to Maariv.

The dog, whose name is Taylor, was rescued by the Society for the Prevention of Cruelty to Animals, where he had been originally adopted from.

He was examined by staff at a Agriculture Ministry facility and deemed to be in good condition; though "cautious and upset" at first, the ministry said in a statement, he is now in a good mood and sociable.

They will now try to find him a new home.

"The dog is receiving lots of care, pets, warmth and love in our facility," said Agriculture Ministry veterinarian Dr. Dagnit Ben-Dov, who had accompanied Taylor throughout the ordeal.

"It turns out the dog has a very good and strong character, and he's very grateful."