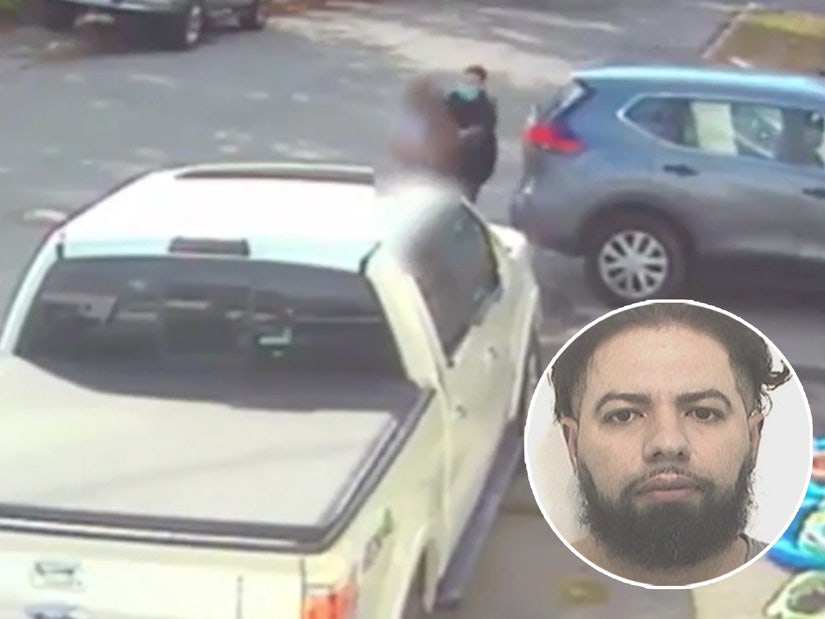 Chilling video shows the girl being grabbed and stuffed in a car right after getting off a school bus.

A Rhode Island man has been charged with kidnapping and sexual assault after the 9-year-old victim remembered the exact Burger King order he bought her after the alleged crimes.

Chilling security footage shows the moment the little girl was snatched from the street in broad daylight on Monday, moments after stepping off the school bus.

The video shows the child walking along a Providence sidewalk around 3PM, when an SUV pulls across her and blocks her path. The girl goes to walk around behind and continue on her way, when the driver — wearing a face mask — gets out, opens a rear door, and suddenly grabs her from behind.

Lifting her by the waist, he hurriedly stuffs her in his back seat before jumping behind the wheel and driving off.

An hour later, the girl was dropped off at the same spot. According to police, she immediately told her parents she had been sexually assaulted.

She was taken to Hasbro Children's Hospital to be evaluated, WPRI reported, as police launched a massive manhunt.

The girl told police the man had taken her to a remote location and sexually assaulted her, before taking her to a Burger King drive-thru to buy her food.

When she was able to recall her exact order — a 10-piece spicy chicken nuggets and a soda — police had the vital clue they needed to track him down.

Investigators hit multiple Burger King locations and trawled through surveillance footage, until they spotted the suspect's vehicle at the restaurant at 966 Park Ave. The manager there went back through the orders until he found the matching one and provided detectives with the debit card number.

After obtaining a warrant, police went straight to the bank, where they got a name and address for one Luis Martinez Romero.

The 34-year-old, who is married with a newborn baby, was immediately arrested at his home. Police said he was holding his baby at the time of his arrest.

He was charged with kidnapping a minor and second-degree sexual assault, and is being held without bail.

In Rhode Island, sexual assault of a child carries a possible sentence of 6 to 30 years; convicted kidnappers meanwhile can face 20 years to life.

"This dangerous individual has been removed from the streets of our city due to the swift and vigilant work of our officers who worked tirelessly on this case," Providence Police Chief Hugh Clements said on Wednesday.

"We know when individuals commit something like this that they are prone to thrive off of what they had just done, so it's important to identify and eventually take them off the street."

While Martinez Romero has no criminal record in the state, he has ties to Florida so officers are investigating his past there.

The child, Clements said, is now safe and doing fine, and is receiving all the support and assistance she needs.

A spokesperson for Providence Public Schools told CBS Boston that its school bus drivers never drop off children unless there is an adult waiting for them — if they are 8 or younger.

"If no adult is present at the time the bus arrives at the bus stop, the bus driver and bus monitor will keep the child on the bus and bring him/her to the bus yard where the parents may then pick up their child," the spokesperson said.