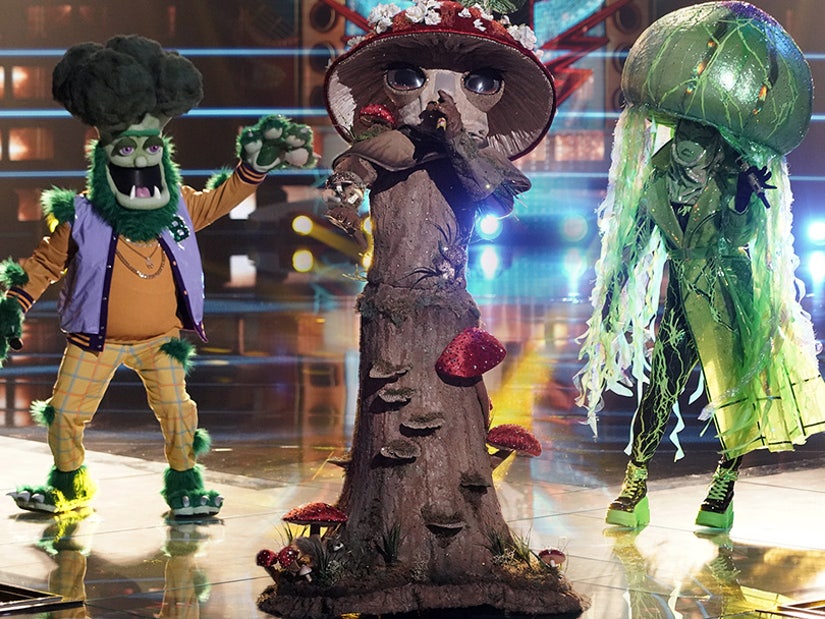 Broccoli, Mushroom and Jellyfish hit the stage for a special Thanksgiving installment, but only two could move on as next week's Super 6 makes a run for the Golden Mask trophy.

Look, we’re not experts by any means, but you’d think the scheduling gods at Fox could have arranged this so next week’s episode was their special Thanksgiving “Masked Singer.”

This week is the Group C finals, with three singers hitting the stage, but next week kicks off the Super 6, with all of the remaining masks hitting the stage together for the first time. And it’s those six who will feature each week in the runoff to the finale. 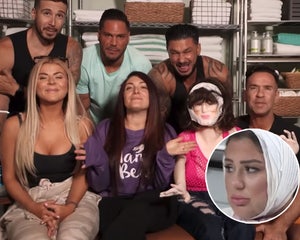 It just seems like a stronger installment to ramp up excitement for the final run of episodes if Fox is anticipating families stuffed with turkey will lounge around on the couch and tune in. It would certainly be stronger than seeing the weakest of the three groups find its Top 2.

Jay Pharoah slid back into the guest spot, along with a slew of his celebrity impressions, to see if the biggest underdog story of the season could emerge triumphant.

The Group C finalists hit the stage together to remind us just how obvious this week’s episode should be as Mushroom continued working that falsetto, Jellyfish rolled out some nice tones and Broccoli … also performed with them.

He’s a fun personality, but there’s just no denying that the others are in a different class vocally than Broccoli. And that goes for our other celebrities who’ve already advanced to next week’s Super 6, as well: Crocodile, Popcorn, Seahorse and The Sun.

Who joined them tonight?

Jellyfish tried her hand at some rudimentary choreography and it was stiff and awkward, telling us she’s not super confident or comfortable performing. But she definitely has a very cool vibe to match a slick vocal. She has a very current and youthful sound and definitely can carry a tune, but does so a bit hesitantly.

Guesses: This week, we saw her sister who was a calculator with 57714 (South Dakota) on her display screen … But could also be “Hills” upside down (is she from “The Hills”?). She did say “in reality” in the package, talking about her “by the book” family and being an overachiever.

Imagery included a tic-tac-toe board (X’s won), a gold stapler and a nail file. Her turkey clue was a message in a bottle reading, “If you find this, you’ll know I’ve never performed on a stage quite like this before.”

Nicole thought maybe this was Charlie XCX with the gold X’s, but Jay heard “in reality” and thinks this must be a reality star. He took the calculator and all the business talk to consider Kylie Jenner, but we don’t think so.

Robin, though, ignored all that and thinks the gold imagery and the yoga mats from previous clues is pointing to an athlete -- but then Nick pointed out Kylie’s dad was an Olympic gold medalist and he said, “Okay, Kylie Jenner.”

Jenny, though, thinks this might actually be an athlete, throwing out McKayla Maroney. But we’re stuck on “The Hills,” and the “Oscar Moment” from weeks past could be when Whitney Port fell while modeling an Oscars dress on “GMA.” Is that you, Whitney?

She got a few guesses from the internet, which seems to be growing more unsure with each passing week. One thing they do agree on, though, is that it's probably not Kylie! Names thrown around included Halle of Chloe x Halle, Billie Eilish, Meg Donnelly, Chloe Kim -- she's definitely got everyone stumped!

No way is Kylie the jellyfish. If she could sing that well Kris would have cashed in on that a LONG time ago. 🤣🤣 #TheMaskedSinger @MaskedSingerFOX pic.twitter.com/ZUSDERXQxD

#TheMaskedSinger #JELLYFISH gave you the answer on the calculator. Remember when we used to type in the words upside down on a calculator. 🤷🏼‍♀️ pic.twitter.com/eRdNv4vKrF 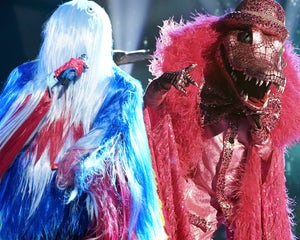 Mushroom is a bit of a sleeper in a competition that’s been dominated by women. He stole the show tonight (and we haven’t even heard Broccoli yet) with a heartfelt and dominant vocal performance. His lower breathy register wasn’t as strong, but his full chest voice is just beautiful. And he takes to the stage like a natural artist who’s very comfortable up there.

Guesses: This week, we learned that he has a real government agent as a friend, along with imagery of brushing a doll’s hair, a bull (Chicago?) and even a boxing or wrestling ring. Her game-changing clue was that the name that she goes by now was not her name when she first sprouted.

Robin took a bit of a stretch to hold onto his previous guess because Jaden Smith dropped his last name, but is that really a name change? Beyoncé still Beyoncé, if you know what we’re saying!

Nicole, though, thinks maybe this sounds like Taye Diggs, who did star in the musical “Chicago,” so it at least ties in with one clue (the bull). “That’s a great guess but completely wrong,” Ken said, shutting her down immediately.

He thinks it could be The Weeknd (Abel was the name he sprouted with), but that’s a caliber of star we’re still not sure would do something quite this silly. We’ve been proven wrong before, but the uncertainty is still there.

Also uncertain still is the Twittersphere, tossing around names like Laverne Cox, Kendall Jenner and Leslie Odom Jr., Jordan Fisher, Billy Porter, Anthony Ramos and Aloe Blacc -- and they're not confident about any of them. They're still uncertain about gender, even.

Did anyone else think that the mushroom on #themaskedsinger sounded like Aloe Blacc?
Not many of the clues point to him so I'm just more confused.

I haven’t heard them or the friend use a pronoun for the mushroom... so that has me 🤔🤔🤔#TheMaskedSinger

Mushroom is Nick Jonas (idk. I’m making things up at this point) #TheMaskedSinger 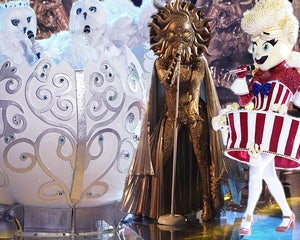 Broccoli didn’t even sing his whole song, opting instead for a stilted kick line all by himself. He’s clearly having fun, but he’s way out of his depth among the other talented singers. He didn’t have the pitch, he had no natural singing quality to his tone and the whole performance was a bit of a mess. But we imagine he’s a delightful personality.

Guesses: We’re still convinced this is an old-school star, probably a comedian. His clue was the two ladies of his life, which could be daughters, a wife and daughter or some similar combination..

His clues suggested a long history in showbiz, including early days watching the circus through a hole in the tent as well as a Jason (“Friday the 13th”) mask, a moose and a wall of beetles (“Animal Crossing” fans recognized those!).

A black-and-white beach ball and inflatable dice again evoked some Las Vegas imagery, while his game-changing clue was that he’s older than the microwave. Jenny was right in that this happened in the ‘40s (1946 to be precise), making him at least 74 years old. You go, Broccoli!

It also leaves Steve Martin barely in the running, at 75, but throws out the likes of Martin Short, Jason Alexander, Steve Guttenberg. Martin and Chevy Chase (77) still fit all those “Three Amigos” clues fromer earlier in the season. He just doesn’t sound like either.

But he did a decent job with tying the clues, like his son Jason and “ringmaster” for Ringo. Robin interpreted a previous numbers clue spelling “Frank” on a phone, tying to Frank Sinatra’s “My Way” and thinks the moose image might tie to Canada, so he went with songwriter and singer Paul Anka … so they think he’s singing bad on purpose?

He dropped one final clue that his favorite Thanksgiving dish is a 42 year old in Chicago. “Is this my dad?” Jenny quipped.

Twitter actually liked Robin's Paul Anka guess, among many of their own including terrible guesses like Hugh Jackman, Jason Alexander and multiple guesses for Ray Liotta (who are all definitely younger than the microwave).

Paul Anka is my best Broccoli guess. He performed in Vegas, worked with Frank Sinatra, and I keep hearing the "Just Don't Look" jingle from his guest spot on The Simpsons. #TheMaskedSinger

I've been getting Jason Alexander vibes from Broccoli clue-wise but his voice doesn't reflect that for me... #TheMaskedSinger 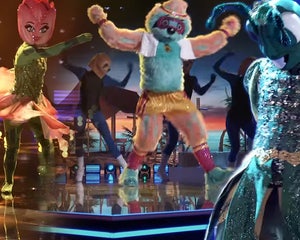 Broccoli seemed a lock for one of these slots, with the other two a little harder to predict. But for overall stage presence and vocal mastery, we’d give the edge to Mushroom, sending Jellyfish to battle it out for her life -- and probably win.

Did the panel and “Super Fans” agree? They did not, instead sending Jellyfish to the next round (women really are the favorites this season). But how on earth can Broccoli stand a chance against what Mushroom can do? He can’t, can he?

Broccoli hit the stage first and showed a little more strength vocally, finding most of his notes and even taking the spirit of the smackdown by getting in Mushroom’s face a little bit, but it was still your drunk dad at karaoke. It was Mushroom who laid the smack down with a Donny Hathaway classic he poured so much heart and soul into. He killed him with kindness.

Results: This wasn’t even close, probably one of the most lopsided battles we’ve ever seen on this show. But at least that means we’ll get to see who Broccoli is before we run out of guesses.

If it’s pure entertainment value, it could have been closer, but even so it was time to chop Broccoli and find out which legendary celebrity has been lurking under that beer gut all season long.

And with his departure, Group C finally lives up to its potential, as both Mushroom and Jellyfish are solid vocalists. The problem with the overall balance this season is that they’ve been the only real vocalists in this group.

Now we’ve got a real competition on our hands as every single animal, edible and celestial body in the Super 6 is impressive vocally, bringing their A game with each performance. 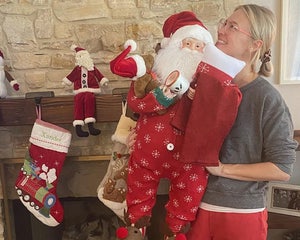 Celebs Who Are Already Celebrating Christmas in November

This one actually proved harder to guess than most of the other ones from this season, or at least more frustrating. It just feels like we should have been better able to narrow it down after all these clues.

Nevertheless, even no answer is better than most of the panel’s first impression guesses, the most ridiculously delightful addition to the show this season.

Hey, look at that! Robin got one right as this was indeed the legendary singer and songwriter Paul Anka. Turns out the “Big Cheese” from the “Foodfellas” package was Frank Sinatra after all.

Talk about a living legend walking onto this stage and having some fun, the 79 year old brought all his energy and clearly enjoyed every bit of this experience. He even had some kind words for the show and the panel for bringing entertainment to the masses during trying times.

Then when he started singing unmasked, he sounded more on pitch than when he sang this Bob Seger classic earlier in the show. Maybe he really was trying to sound more amateurish than he is. Those crooner voices are hard to hide!

“The Masked Singer” returns to its regular timeslot next Wednesday at 8 p.m. ET on Fox. 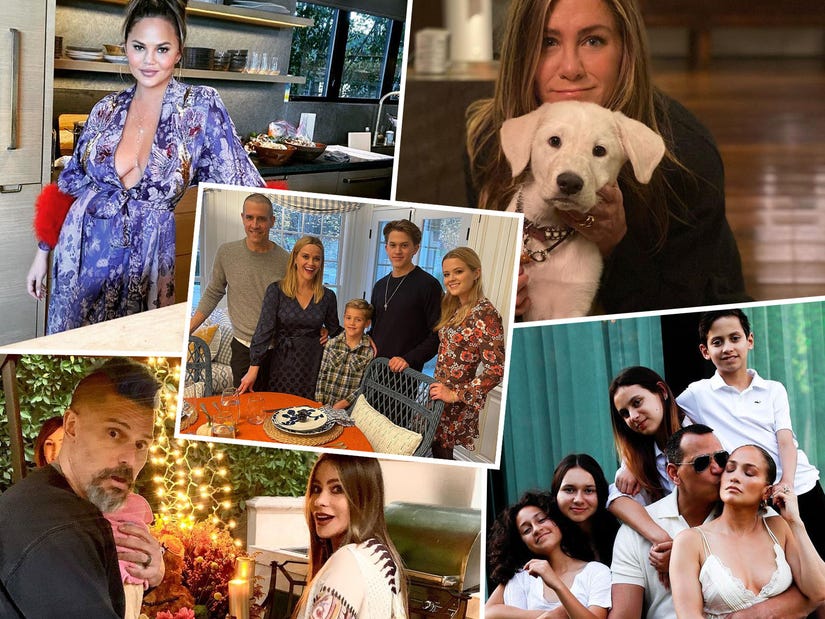