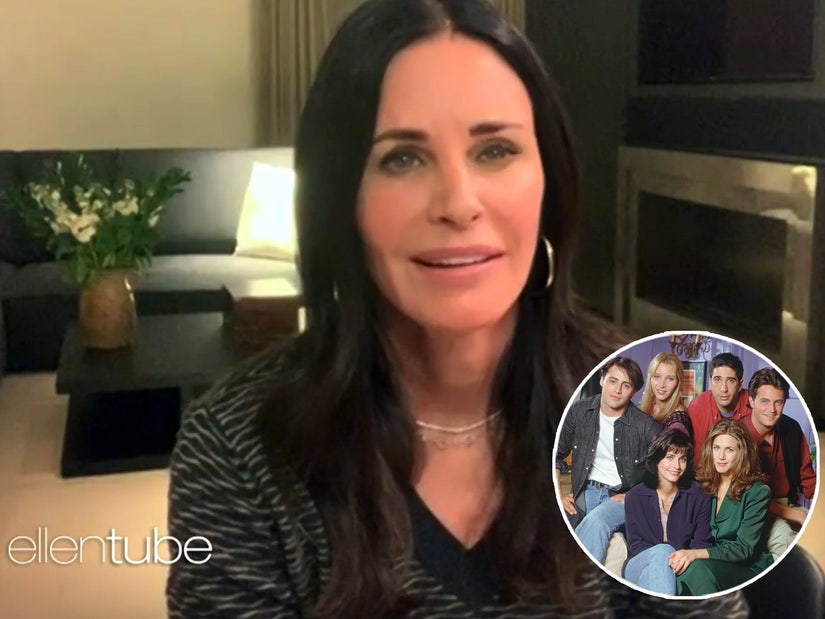 And she delivers on an epic memory with Matthew Perry.

Courteney Cox says filming the "Friends" reunion was "so emotional."

While appearing on Thursday's episode of "The Ellen DeGeneres Show," the actress recalled shooting the HBO Max reunion special and reuniting with her former castmates.

"It was unbelievable. It was so emotional," Cox said of the reunion, which she confirmed has wrapped filming. "It's an unscripted reunion, but we got to be on [Warner Bros.'] Stage 24 for the first time, all of us in, like, I forgot how many years. 15 years? 17 years?"

"It was great. It was really fun," she added. "We had a lot of special surprises. It was fantastic. It really was."

"Friends," which ran from 1994 to 2004 on NBC, starred Cox, Jennifer Aniston, Matthew Perry, Lisa Kudrow, David Schwimmer and Matt LeBlanc. A release date for the unscripted reunion special has yet to be announced.

Also during Cox's appearance on "The Ellen DeGeneres Show," Ellen unlocked what appeared to be a not-so-fond memory of Cox's when she brought up the time Cox and her fellow castmates danced in a fountain, which is shown in the "Friends" opening credits.

"How did that happen and whose idea was it to get in?" Ellen asked, to which Cox quipped, "It definitely wasn't mine!"

"We were in that fountain for a long time. Somebody thought that would be really fun and let me tell you what happens, it's not fun to be dancing in a fountain for hours and hours," she continued, before sharing a hilarious comment Perry made at the time. "I remember Matthew Perry saying at one point -- and we didn't know each other that well at that point -- but I remember -- and this was so Matthew -- but he was like, 'Can't remember a time that I wasn't in this fountain.'"

"Literally, we were just like, 'How much longer are we going to pretend to love dancing in water?' But it was fun -- but not really," Cox added.

See more from Cox in the clip, above.