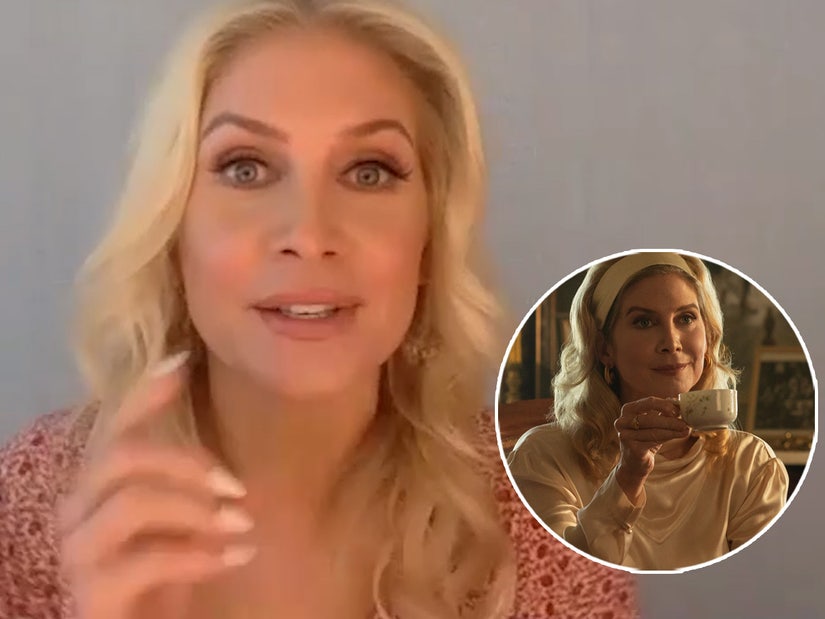 The actress also reveals her reaction to the big twist in the finale and shares what she would like to see happen in Season 3 if the show is renewed.

Spoilers ahead for Season 2 of "Outer Banks."

Elizabeth Mitchell is opening up about joining "Outer Banks" for Season 2 -- and how she prepared for the role of the show's new antagonist, Carla Limbrey.

Netflix's "Outer Banks" centers around a group of teens -- the "Pogues" -- and their adventures in the Outer Banks of North Carolina. Season 2 sees John B (Chase Stokes) and Sarah Cameron (Madelyn Cline) on the run in the Bahamas following their near-death experience in the Season 1 finale. Meanwhile, at home in OBX, the stakes are high for JJ (Rudy Pankow), Pope (Jonathan Daviss) and Kiara (Madison Bailey). While the $400 million treasure remains in the game, the group also discovers a new secret, which takes them on another dangerous mission and has them facing both new and old foes. 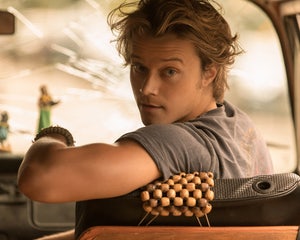 One of the new foes is Carla Limbrey (Mitchell), a wealthy and incredibly ill woman and relative of Herman Limbrey, who was the captain of the Royal Merchant. Although Carla isn't interested in the gold, she is determined to find the Cross of Santo Domingo, which is said to have a shroud locked inside that has the power to heal the sick.

While speaking with TooFab, Mitchell discussed what drew her to the project and to her character.

"I hadn't watched 'Outer Banks,'" began Mitchell, 51. "I was mistakenly thinking that it was kind of a teen show and you know, it's not. 'Outer Banks' is so funny to me in that most of the people I know who love it are my age. I understand that kids love it too, but there's so much there. There's just so much complexity and [it's] so great. Anyway, I hadn't watched it and then I watched it -- just binge-watched it as soon as I had the audition."

"I just quite liked [Carla]," she continued. "I was terrified of playing someone like that ... I've met these women and they always just felt so distant from my reality. The way that they treat people, the way they walk through the world, the way they see themselves, that amount of entitlement is not something I really like to be around -- it makes me feel uncomfortable -- but that was the why of it, that's why I wanted to play her. I wanted to have a better understanding. I think through curiosity we gain a little bit of wisdom so my hope was that by playing someone like this I might have a greater understanding instead of fear." 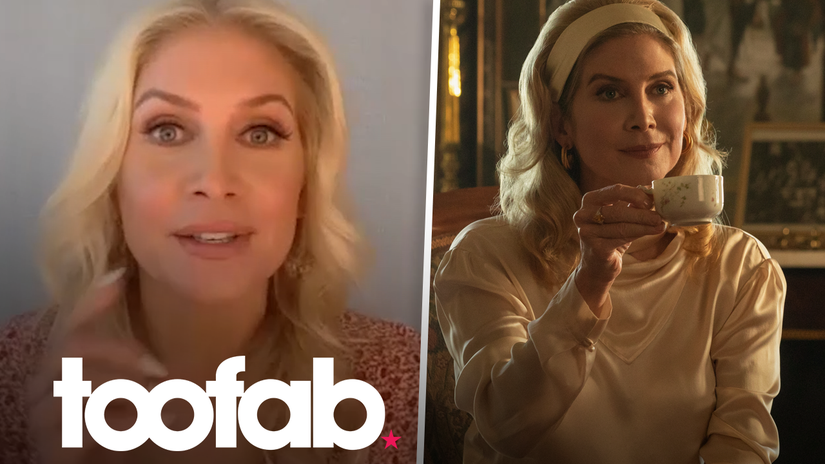 In order to appear very ill to play Carla, Mitchell said she lost 15 pounds and she "did it quickly." However, the actress shared that it wasn't too difficult to lose weight for the role, explaining why dropping pounds to not look "attractive" is "easier."

"[Carla] is very sick and she is dying and she's also in a tremendous amount of pain so that shapes a person," Mitchell said. "Preparing [to play] her, physically, I just lost weight and I did it quickly. I ate basics ... but nothing that would give me glowing skin, nothing that would flush your face out. Women, we need a fair amount of weight on for our faces to look full and healthy and pretty and all those things that we go for. But for Carla, she's so ill that I wanted everything to just be faded and not lush and not any of those things. So I wanted to just lose weight quickly in a way where you kind of are like not that, 'Oh my gosh, you lost weight. Well done!' ... Instead of, you want that, 'Oh, you've lost weight. Are you okay?' That's what I wanted."

"I probably [lost] like 15 pounds, which, by the way, was not so hard to do," she continued. "I mean you cut out all of your favorite things and then that's kind of it. But losing weight and not looking attractive is easier to do than losing weight and making it healthy and all of those things. So I did it because I just wanted her to not look vibrant, I didn't want her to look healthy. I lift weights and I run like crazy and I'm always active. I work out a good hour every day but for Limbrey I just walked on the beach and ate a lot of vegetables ... It was fun though!"

Mitchell went on to detail how she prepared to get into the "mindset" of her character.

"I just tried to go there," she explained. "I tried to think of what does she want? What is driving her? How many people does she have to make wrong to be right? And to me, that's how we get into these entitled characters that from the outside are the villain -- and of course act that way and through history have been -- but what does it feel like to be inside them? And I think the key is to make everyone around you wrong and you are the only right one and you're the only one who understands and I think that's the way to do it and it's a tough shift but it's interesting for sure." 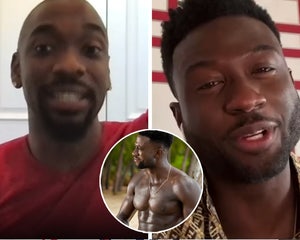 Sinqua Walls on Preparing to Take His Shirt Off for Resort to Love, Talks Favorite Wedding Songs with Jay Pharoah (Exclusive)

As for why Carla is so determined to find the shroud even though its apparent healing powers seem "too good to be true," Mitchell said Carla is "desperate" to find a cure for her illness.

"I think she's tried everything else," she said. "I mean when you look around her house, you see that it's not just one thing that she's been obsessed with. She has all kinds of different mystic possible cures everywhere you look and ... I think that although [she's] not a particularly kind woman I think that she is a bright woman and I think that she has done her research and there's more than one account of people being healed from this ... it's like example after example after example. ... The problem is the finding it, not that the miracle will occur but the finding it. It's too bad that her faith doesn't lead her to more kindness, which you always hope that it does, but it doesn't."

In the penultimate episode, Mitchell's Carla finally gets the cross in her own hands, only to find that the shroud isn't inside. However, during the last scene in the finale, Carla arrives in Barbados after receiving a letter. A few short moments later, the audience learns that John B's father, Big John, who had been presumed dead, is, in fact, alive. And Big John tells Carla that he knows the location of the shroud and will help her if she helps John B.

Mitchell said the big twist "wasn't written in the script" and was a "secret."

"I was so excited," she recalled, adding that the show called her and asked her if she had a passport to travel to Barbados. "The answer was, 'Yeah, I do, I'll do that. When should I do that? How do I get there? I'm happy to go there. Do I swim? I mean, I don't know whatever you guys want, it doesn't matter. I'm cool!' But that was my reaction. I was super excited."

Mitchell then explained what she would like to see happen in Season 3 -- if the show is renewed -- including if she thinks Carla will not only find the shroud but if it'll end up healing her.

"They do ground the show in reality," she said. "It would be fascinating to take that kind of a leap, but just the mere fact that she believes it will [heal her] is fascinating to me. You know me, as a mom and as a woman in this world who is striving to hopefully have things be better than they are, I would love for her to have a crisis of conscience and discover that she has been an entitled, wealthy, rich lady and that she needs to stop. But that's not gonna happen."

"... What I enjoyed in Season 2 were the interactions. I loved playing with the kids," she added. "When we are off camera or the camera is away, we are laughing so hard. They are respectfully irreverent, funny, [and] just genuinely just so much fun, so anything I can do with them, makes me happy. And all of the other actors are so kind and so good, so I wouldn't mind some hefty interactions with pretty much any member of that cast in a way that feels kind of true to the character. I mean [Carla] hasn't found what she's looking for. So, the thing that's driving her has not been settled."

Meanwhile, Mitchell also talked to TooFab about starring in the upcoming Netflix vampire drama series, "First Kill." In addition, the star took a look back at when she first appeared on "Lost," on which she played Dr. Juliet Burke, and recalled what it was like joining the cast of an already established series. This October will mark 15 years since Mitchell made her debut on the Emmy-winning show.

Check it out in the full interview, above!