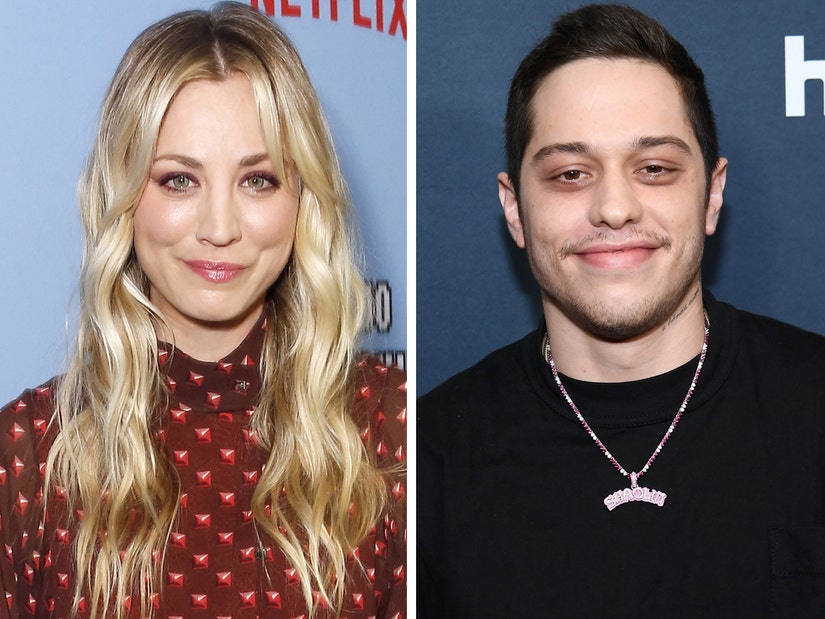 "Annoying Peter while he's studying has become my favorite pastime."

It's safe to say that Kaley Cuoco and Pete Davidson are having a blast on the set of their new movie!

Earlier this week, Cuoco, 35, shared a series of videos on her Instagram Story in which she adorably kept "annoying" Davidson, 27, while he was trying to study his script for their rom-com, "Meet Cute."

In the first clip, Davidson, who was wearing a striped shirt, held up his script to the camera. "Just trying to learn my lines," he said, before Cuoco then popped into the background. The actress, who was donning a white bathrobe, approached her co-star while lipsyncing to Kygo and Whitney Houston's song, "Higher Love." Davidson reacted with a laugh.

The second video, which was marked with a timestamp of 10:19 PM, featured Davidson once again being hilariously interrupted by Cuoco as he attempted to learn his lines. The "SNL" star had appeared to have taken off his shirt as it was placed over his shoulders.

"Really late night, really late night, just working on my [lines]. It's really exhausted [sic]," Davidson said drowsily. Cuoco then appeared in the frame, lipsyncing and bopping along to Eric Church's "Drink in My Hand," which was playing in the background.

And it seems that it was the "Big Bang Theory" actress who was in charge of the music. "He also hates my music choices which makes things even more fun," Cuoco wrote alongside the footage.

But the behind-the-scenes fun didn't stop there as Cuoco went on to blast "Let It Go" from "Frozen" in the third clip. As the Disney track could be heard in the background, Davidson yawned, telling the camera, again, that it was a "really late night" and he was working on his lines, "trying to get it right."

Cuoco suddenly appeared behind Davidson's chair, lip syncing the lyrics to the song. Davidson failed to keep a straight face and laughed at his co-star. "I played 'let it go' 300 times," Cuoco captioned the clip, which included the timestamp of 10:22 PM.

In June, Deadline reported that "The Flight Attendant" star and "Big Time Adolescence" actor were in talks to star in the romantic comedy. According to the outlet, "Meet Cute" is "a wildly inventive deconstruction of the romantic comedy built around the question: What would you do if you could travel to your loved ones’ past, heal their traumas, fix their problems, and change them into the perfect partner?" Per Deadline, Cuoco and Davidson play Sheila and Gary in the film. "Meet Cute" is directed by Alex Lehmann and is written by Noga Pnueli.

Cuoco posted about the project at the time, sharing Deadline's article.