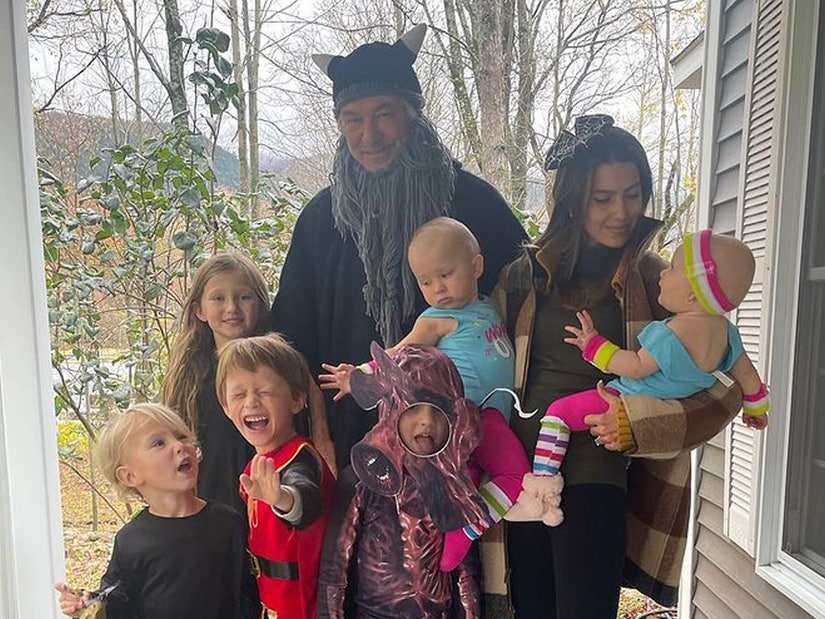 "Parenting through this has been an intense experience, to say the least."

Hilaria and Alec Baldwin "rallied" to celebrate Halloween for their kids, despite dealing with the aftermath of the tragic shooting on the set of Alec's film "Rust," in which the actor discharged a prop firearm that killed cinematographer Halyna Hutchins.

On Sunday, Hilaria took to Instagram to share a series of photos -- along with an adorable video -- of the family dressed in Halloween costumes. Hilaria, 37, and Alec, 63, share six children together: Carmen, 8, Rafael, 6, Leonardo, 5, Romeo, 3, Eduardo, 13 months, María, 8 months

In the pics, the family -- who is currently staying in Vermont -- can be seen posing in their various getups on a porch, while the video showed the couple's two infant children -- Eduardo and María -- rocking out to some music.

"Parenting through this has been an intense experience, to say the least," Hilaria began in the post's caption. "Today, we rallied to give them a holiday. Last min costumes…a little hodge-podge…but they were so happy and that warmed my mama heart."

"Happy Halloween, from the Baldwinitos," she added. "They give us ❤️. We send you ❤️🎃."

This came one day after Hilaria shared a photo holding Alec's hand. "I love you and I'm here❤️." she captioned the post.

Earlier on Saturday, the fitness instructor opened up about the "Rust" shooting in an interview with The New York Post. Hilaria admitted that she's concerned Alec will develop post-traumatic stress disorder (PTSD) in the wake of the accident and also explained why their family traveled to Vermont.

"I brought [Alec] up here because we have to mourn Halyna's death," she said. "Alec had a really traumatic thing happen, and I am trying to limit the PTSD."

"You look at what happens to soldiers and police officers when something like this happens, it's traumatic," she continued. "We just came up here for quiet."

Hilaria also weighed in on whether Alec will act again, with The Post noting that she "was hopeful but not certain" he would. "He needs space for me to take care of him and his mental health," she explained, "It's an awful thing that happened. Alec feels awful."

On October 21, "Rust" director of photography Halyna Hutchins was killed after a prop firearm was discharged by Alec on the western film's New Mexico set. The film's director Joel Souza was also injured.

The morning after the devastating accident, Alec released a statement on Twitter.

"There are no words to convey my shock and sadness regarding the tragic accident that took the life of Halyna Hutchins, a wife, mother and deeply admired colleague of ours," he tweeted. "I'm fully cooperating with the police investigation to address how this tragedy occurred and I am in touch with her husband, offering my support to him and his family. My heart is broken for her husband, their son, and all who knew and loved Halyna."

Hilaria broke her silence a few days later, sharing a statement on Instagram.

"My heart is with Halyna. Her husband. Her son. Their family and loved ones. And my Alec," she wrote. "It's said, 'There are no words' because it's impossible to express the shock and heartache of such a tragic accident."

Meanwhile, Alec addressed the shooting for the first time on camera on Saturday. In the footage, which was posted by TMZ, the actor called the accident a "one in a trillion episode" and described Halyna as his "friend." See what else he had to say about the tragedy, here.