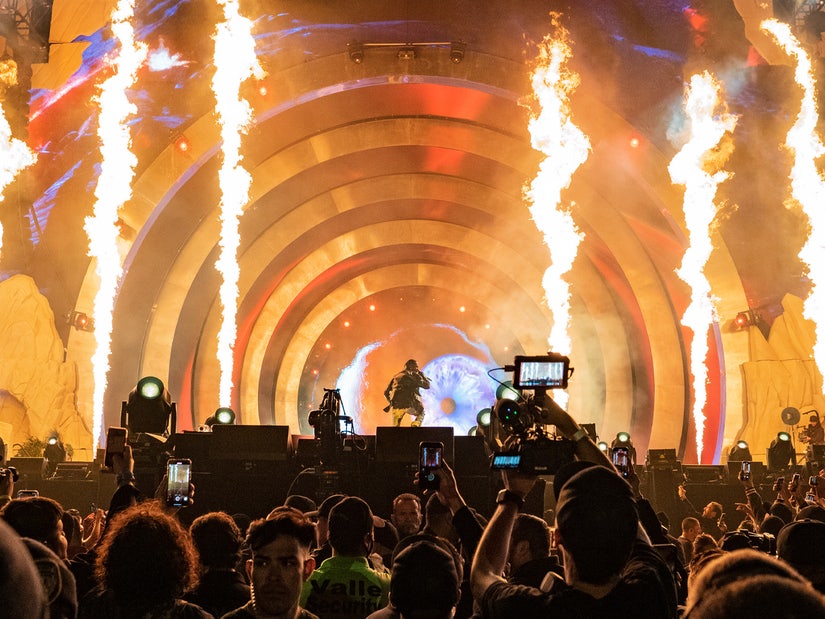 SZA, who performed at the Astroworld Festival just hours before Scott took the stage, tweeted that she is "speechless" and "praying" for those impacted.

Travis Scott, who was unaware of how serious things were getting as the crowd surged during his life performance at the Astroworld Festival on Friday per TMZ, shared that he was "absolutely devastated" in a statement posted to his social media.

"My prayers go out to the families and all those impacted by what happened," he added. The rapper noted that he is working in cooperation with Houston PD and is "committed to working together with the Houston community to heal and support the families in need."

Kylie Jenner, who was in attendance and is pregnant with Scott's child, was uninjured, per TMZ. She shared footage to her Instagram Stories from the event, including an amblunance trying to make its way through the crowd. On Saturday night, she broke her silence about the experience.

"Travis and I are broken and devastated," she wrote. "My thoughts are with all who lost their lives, were injured or affected in any way by yesterday's events." 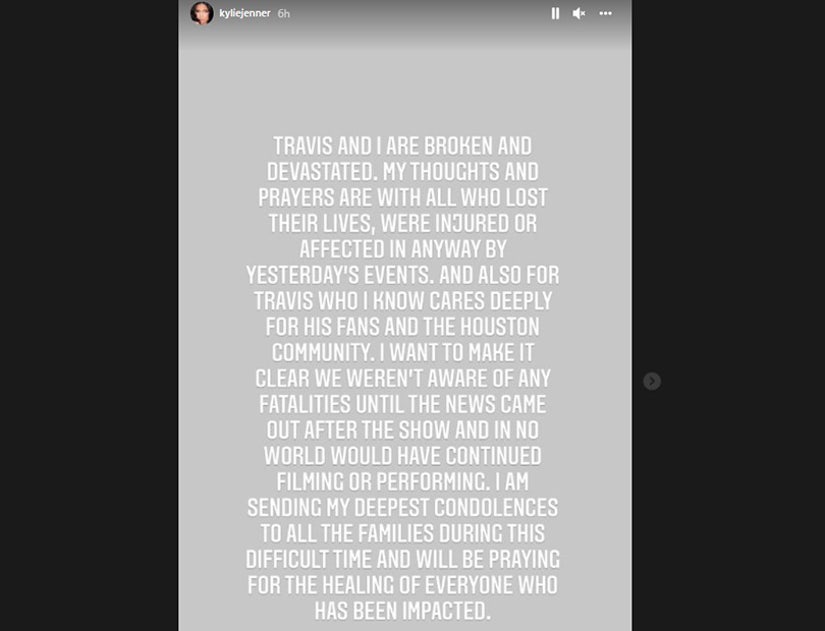 She also shared sympathy for Scott himself, saying that he cares deeply about his fans and the community in Houston. Echoing what was reported by TMZ, Kylie also emphasized that neither she nor Scott were aware of any fatalities until after the show was over.

Speechless about last night I’m actually in shock n don’t even know what to say .. just praying for everyone in Houston especially the families of those that lost their lives 😔🙏🏾

SZA, who performed at the festival just hours before Scott took the stage, also commented via Twitter, writing that she is "speechless."

"I’m actually in shock n don’t even know what to say .. just praying for everyone in Houston especially the families of those that lost their lives," she added.

The Astroworld Festival released a statement after at least 8 people were killed and hundreds injured during Travis Scott's performance in Houston on Friday night.

"Our hearts are with the Astroworld festival family tonight -- especially those we lost and their loved ones," the Saturday tweet read. "We are focused on supporting local officials however we can. With that in mind the festival will no longer be held on Saturday [..] Thank you to our partners at the Houston Police Department, Fire Department and NRG Park for their response and support."

The organization also asked if anyone had information on the "series of cardiac arrests that took place" during the show and thanked public safety authorities for their support.

According to officials, the incident at the outdoor music festival at NRG Park occurred when the crowd of 50,000 began to surge towards the stage after Scott began performing around 9 pm. As people at the front were becoming crushed, a panic ensued, the situation escalated and security personnel became overwhelmed, per reports.

8 people died, with one victim a 10 year old, according to TMZ. The causes of deaths are pending the medical examiner's determination, according to Houston Fire Chief Sam Peña. 300 hundred attendees were also injured.

The ongoing investigation will explore "what caused, one, the issue of the crowd surge, and two, what prevented people from being able to escape that situation," Peña also revealed to CNN.

Early Saturday morning, Texas Gov. Greg Abbott also issued a statement, saying, "What happened at Astroworld Festival last night was tragic, and our hearts are with those who lost their lives and those who were injured in the terrifying crowd surge."

Kylie Jenner trying to be supportive of Travis Scott #AstroWorld festival & posts this video with EMT in crowd not realizing the tragedy that was already happening? 🚑🚨pic.twitter.com/HKdviVn5TQ

Meanwhile, Kylie Jenner, who is expecting her second child with the rapper and was in attendance with the their 3-year-old daughter Stormi, posted several clips of the event, including one where an ambulance can be seen attempting to make its way through the crowd towards the stage.

Her sister, Kendall Jenner, also attended the event and posted clips of it to her own IG Story. She shared photographs of the stage before the show as well, with the caption, "will you be at the mountain?"