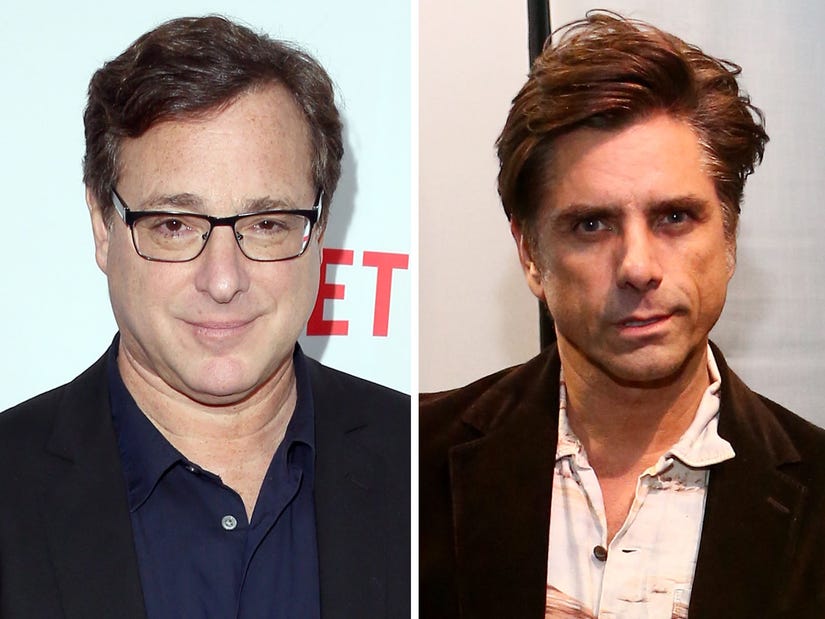 Saget will reportedly be laid to rest on Friday in a small, private memorial service in Los Angeles.

John Stamos is sharing his thoughts ahead of the funeral for his "Full House" co-star and friend, Bob Saget.

According to TMZ, Saget -- who died last Sunday at the age of 65 -- will be laid to rest on Friday in a small, private memorial service for close friends and family at Mt. Sinai Memorial Park Cemetary in Los Angeles. Following the service, there will reportedly be a reception at the home of "Full House" creator Jeff Franklin.

On Friday morning, Stamos took to Twitter, writing, "Today will be the hardest day of my life." He then quoted the Serenity Prayer, writing, "God, grant me the serenity to accept the things I cannot change, courage to change the things I can, and wisdom to know the difference."

Today will be the hardest day of my life. God, grant me the serenity to accept the things I cannot change, ⁰courage to change the things I can, ⁰and wisdom to know the difference.

This comes after the 58-year-old actor offered an update on how he's coping with the tragic passing of his longtime friend on Thursday.

"The mornings are hard. Middle of day comes in waves," he tweeted. "Mostly bad. Nighttime is hard. I miss getting a text from him right now. Me answering. Him saying he's too tired to respond. Me saying, 'Then why'd you text me so early?'"

Saget was found by hotel security around 4 p.m. ET at the Ritz-Carlton hotel in Orlando, Florida on Sunday, per TMZ, following a standup performance in Jacksonville. Saget's cause of death won't be determined for weeks, however, law enforcement sources told the website that they see signs pointing to a heart attack or stroke. Sources also said Saget was found "tucked in bed," showing evidence that he died in his sleep.

The mornings are hard. Middle of day comes in waves. Mostly bad. Nighttime is hard. I miss getting a text from him right now. Me answering. Him saying he’s too tired to respond. Me saying, “Then why’d you text me so early?”

In the wake of the news of Saget's death, Stamos shared his reaction on Twitter, tweeting, "I am broken. I am gutted.  I am in complete and utter shock. I will never ever have another friend like him. I love you so much Bobby."

The following day, Stamos -- who also worked with Saget on the "Full House" revival, "Fuller House" -- took to Instagram to post a heartbreaking tribute, in which he admitted that he's "just not ready to say goodbye" to Saget.

"I'm not ready to accept that he's gone -- I'm not going to say goodbye yet," Stamos captioned a photo of himself and Saget.

I am broken. I am gutted. I am in complete and utter shock. I will never ever have another friend like him. I love you so much Bobby.

"I'm going to imagine him out there, still on the road, doing what he loves with all his heart and humor," Stamos wrote. "He's standing on stage, killing! Another two-hour set in front of a couple hundred of the luckiest people on the planet. They're laughing so hard, they weep."

"On his way to the hotel, he calls his beautiful, loving wife, Kelly," he added, referencing Saget's wife, Kelly Rizzo. "He says he feels 26 again, alive! Then asks her to fix up a picture he wants to post. She tells him it doesn't need fixing, and tells him how handsome he is. He tells her he loves her with every bit of his heart. And when he gets to the hotel to put his head on the pillow, he misses his daughters, his family, his friends. God, he loves us all so much. And he goes to sleep dreaming of when we'll all meet again -- and he's smiling. I know in my heart he's smiling, still hearing the laughter from a few hours before."

Meanwhile, on Monday, the core cast of "Full House" -- including Jodie Sweetin, Candace Cameron Bure, Mary-Kate and Ashley Olsen, Lori Loughlin, Dave Coulier, Andrea Barber, Scott Weinger and creator Jeff Franklin -- released a joint statement reading, "Thirty-five years ago, we came together as a TV family, but we became a real family. And now we grieve as a family. Bob made us laugh until we cried. Now our tears flow in sadness, but also with gratitude for all the beautiful memories of our sweet, kind, hilarious, cherished Bob. He was a brother to us guys, a father to us girls and a friend to all of us. Bob, we love you dearly."

"We ask in Bobs honor, hug the people you love. No one gave better hugs than Bob," the statement concluded.

Click here to see how the "Full House" cast -- as well as other co-stars, comedians, friends and celebrities -- paid tribute to Saget on social media.