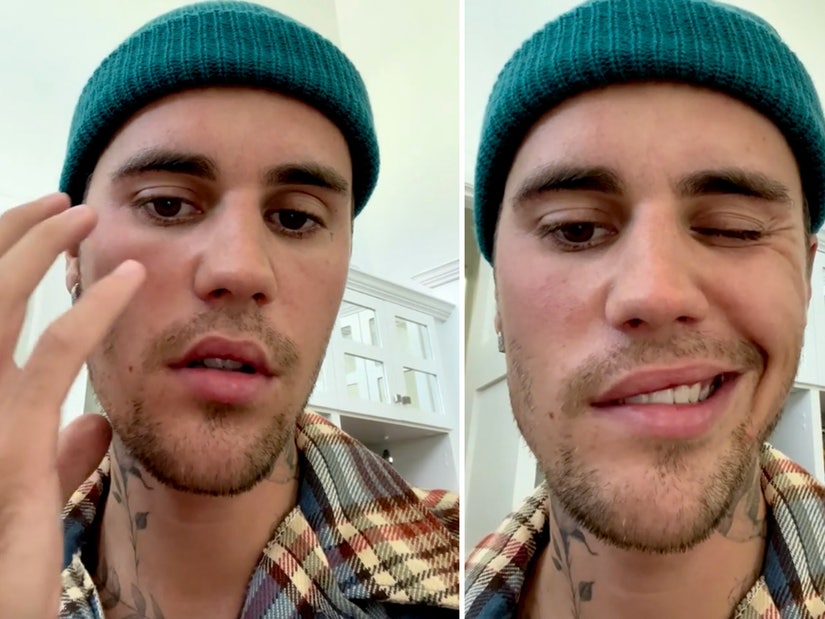 "As you can see, this eye is not blinking, I can't smile on this side of my face, this nostril will not move."

Justin Bieber has opened up about the "pretty serious" illness he's been battling that's forced him to cancel a number of tour dates.

"I wanted to update you guys on what's been going on. Obviously, as you can probably see from my face, I have this syndrome called Ramsay Hunt syndrome and it is from this virus that attacks the nerve in my ear, my facial nerves and has caused my face to have paralysis," he shared in a new video on Friday.

"As you can see, this eye is not blinking, I can't smile on this side of my face, this nostril will not move. So there's full paralysis on this side of my face," he said, showing off his lack of movement. "So for those who are frustrated by my cancelations of my next shows, I'm just physically obviously not capable of doing them. This is pretty serious, as you can see, I wish this wasn't the case but obviously my body's telling me I gotta slow down and I hope you guys understand."

"I'll be using this time to just rest and relax and get back to 100% so that I can do what I was born to do. In the meantime, this ain't it. I gotta go get my rest on, so that I can get my face back to where it's supposed to be," he continued. "I love you guys, thanks for being patient with me. I'm going to get better and I'm doing all these facial exercises to get my face back to normal and it will go back to normal, it's just time and we don't know how much time it's gonna be but it's gonna be okay."

He concluded, "I have hope and I trust God and I trust that it's all for a reason. I'm not sure what that is right now, but in the meantime, I'm gonna rest and I love you guys. Peace."

Justin Bieber has postponed several tour dates due to an unknown illness.

On Tuesday, the singer took to his Instagram Story to share the sad announcement that he has to "postpone" a "few shows" on his Justice World Tour after his undisclosed "sickness" had worsened. 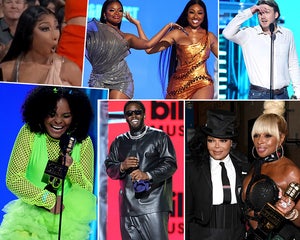 "Can't believe I'm saying this. I've done everything to get better but my sickness is getting worse," Bieber, 28, wrote. "My heart breaks that I will have to postpone these next few shows (doctors orders)."

"To all my people I love you so much and I'm gonna rest and get better!" he added.

The Grammy winner revealed the news only hours before he was set to take the stage in Toronto on Tuesday night. The concert was set to be the first of two scheduled shows at Toronto's Scotiabank Arena.

The Scotiabank Arena's Twitter account released a statement about the postponed shows, sharing that Bieber's cancelation was "due to a non-Covid related illness." 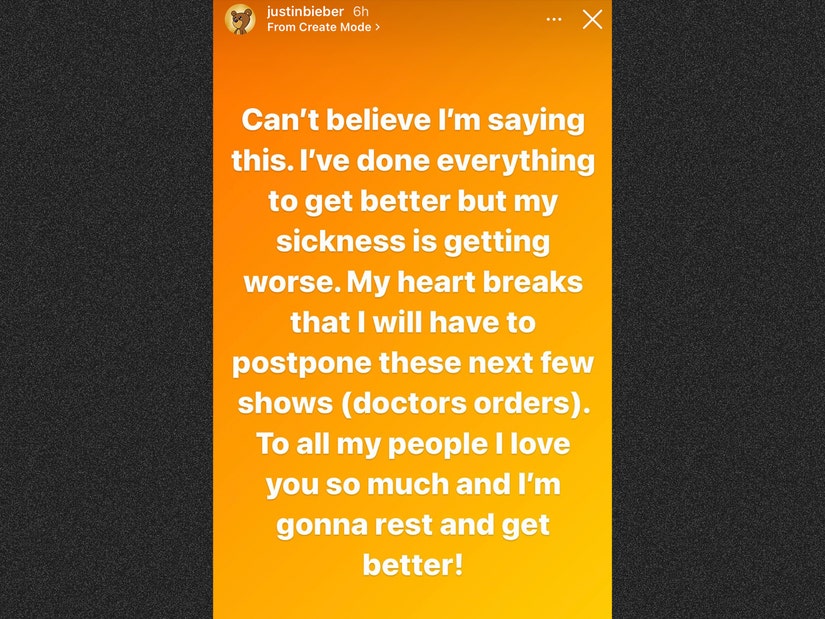 Meanwhile, the "Peaches" singer's Washington D.C. concert, which was set for June 10, has also been postponed and has been removed from the tour website. However, Bieber's next tour stop, two nights at New York's Madison Square Garden, are still currently slated for June 13 and 14.

The rescheduled tour dates were not announced.

This isn't the first time Bieber's tour dates have been postponed or canceled. The Justice World Tour -- which promotes his fifth and sixth studio albums "Changes" and "Justice" -- was initially intended to be the Changes Tour and was set to begin in 2020. However, because of the Covid-19 pandemic, it was postponed to 2021, before being pushed back again to 2022.

And back in February, only two days into his Justice World Tour, the "Yummy" crooner tested positive for Covid-19 and had to reschedule two Las Vegas concerts.

While Bieber didn't offer any more details about his current illness in his Tuesday post, he's been open about his health battles -- both mental and physical -- over the years.

In January 2020, Bieber revealed he had been diagnosed with Lyme disease. The following month, in an episode of his docuseries "Seasons," the "Ghost" singer spoke out about his past battle with drug abuse.

Meanwhile, Bieber has also been candid with fans about his struggles with anxiety and depression.