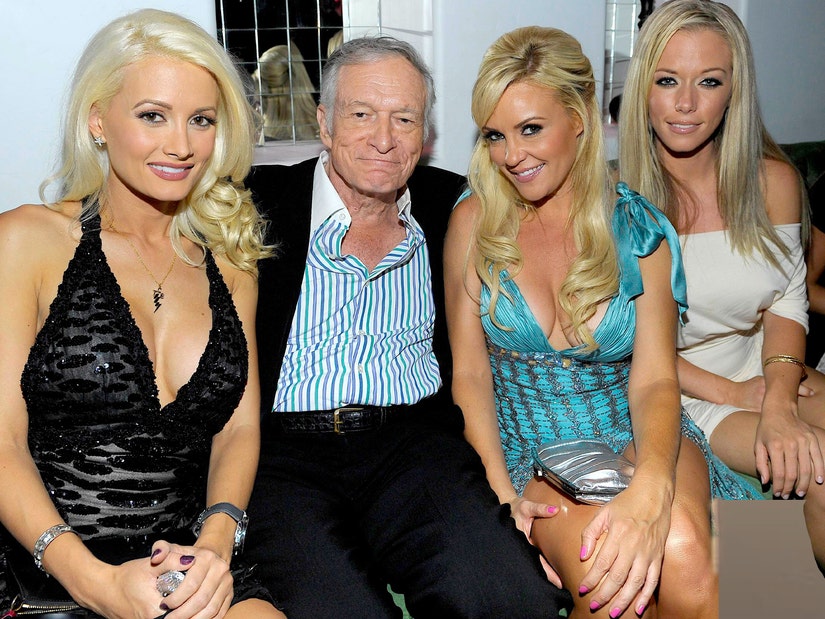 It's been 17 years since the premiere of "The Girls Next Door" and the women at its center are still surprising fans with stories from their time with Hugh Hefner at the Playboy Mansion.

Both Bridget Marquardt and Holly Madison appeared on Heather McDonald's Juicy Scoop podcast this week, where they spilled even more about what they allegedly experienced as one of Hef's so-called "girlfriends" alongside Kendra Wilkinson, who did not join them for the interview.

While Holly has opened up in detail about her first time with Hefner in the past, it was Bridget who shared her experience on the podcast. She said that after she started attending parties at the mansion, Hefner asked her out and initially turned him down.

"I was like, oh no, I've heard stories about what went on. I just really want to be a Playmate, that's why I'm here," she said. "He was very gracious and nice about it, everything was fine." But, when "nothing had moved" in her life after some more time in Los Angeles, she thought "What do I have to lose?" and took him up on his offer.

Eventually, she found herself amongst the group of women who followed Hef to his bedroom.

"I was thinking I could get out of this a little while. The first night I was like, 'I'm not ready yet, I'm not going to do anything I don't want to do,'" she recalled. "It's not like I never would have done that with him, but I wasn't ready in the moment."

But she said there were other girls who "put pressure on you" and was told she'd "never be invited back" if she didn't eventually join in.

"I was still just gonna watch and then [one of the women] was like, 'Aren't you gonna go?' It's like, 'You need to go.' And I was like, 'I would rather not.' And she's like, 'Well, then you probably won't be invited back,'" she recalled. "So then I was like, 'Okay.' And I'd seen what everybody else was doing, so I knew that this was like a 10 second thing. I mean, definitely no more than a minute."

She said that after that first night, she made it her mission to be the first woman he had sex with on a given evening "because there was no way I wanted going after other people." She continued, "If there's new girls coming up, which there often were, like, I just wanted to be first and be done. And I felt like that was the cleanest way to be in and out of it."

Added Holly: "I felt everybody was just trying to get it done as quickly as possible, the whole process." 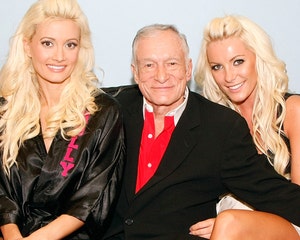 Bridget, Holly and Kendra all lived together while filming "The Girls Next Door," before the trio eventually moved out and launched their own solo TV shows. But those shows -- specifically "Kendra on Top" and "Holly's World" -- are allegedly what drove a wedge through Wilkinson and Madison.

"When we were leaving, I loved Kendra. We had had kind of our sibling rivalry while we were there. But I felt like after she was with Hank, she just seemed so much more mature and so happy and I feel like we were all three just so happy for each other and the direction our lives were going," Madison explained, as Bridget pointed out that they were both in Kendra's wedding and Bridget even threw her baby shower.

"Things got weird with me and Kendra and I felt like [the producer] was encouraging that, like he wanted us fighting, he wanted drama. He wanted me to come on her show and like brag about how much money I was making in Vegas, so she'd get a little poke in the ass to take more jobs to make her show more interesting," Holly continued. "That's what he told me and things got weird between us." 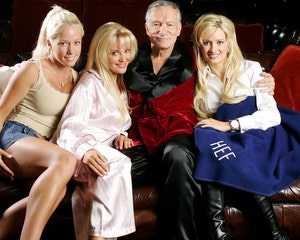 Eventually, Holly had a falling out with the producer, who thought a fight between the two women would be "good publicity" for the show -- something Madison wanted no part of. While in that angry mindset, she got to work on her "Down the Rabbit Hole" book, admitting she was "mad" at both the producer and Kendra when she wrote it. Both Holly and Kendra have been pretty vocal about the fact they're no longer friends in recent years.

Bridget, however, told McDonald that she has no "ill feelings to Kendra or Hef" or the producer in question, saying that her whole experience at the mansion was "98%" positive looking back. She believes that positive attitude was likely why she didn't appear too much in the bombshell-packed "Secrets of Playboy" docuseries, despite sitting down for a lengthy interview.

Speaking of the A&E doc, McDonald also asked Holly for her reaction on Karissa Shannon's claim that she got pregnant with and aborted Hefner's baby when they were together, after the Playboy mogul tried and failed to have a child with Madison.

"I'm never gonna say I don't believe anybody's story because I wasn't there and anything can happen, but it's surprising," said Holly. "But anything can happen. I don't like it when people come for my story and says, 'I was there in the '70s and it wasn't like that.' You weren't there when I was there."

After Holly released her book and before his death, Hefner responded with a statement that seemed aimed at any exes who ever spoke out against him in public.