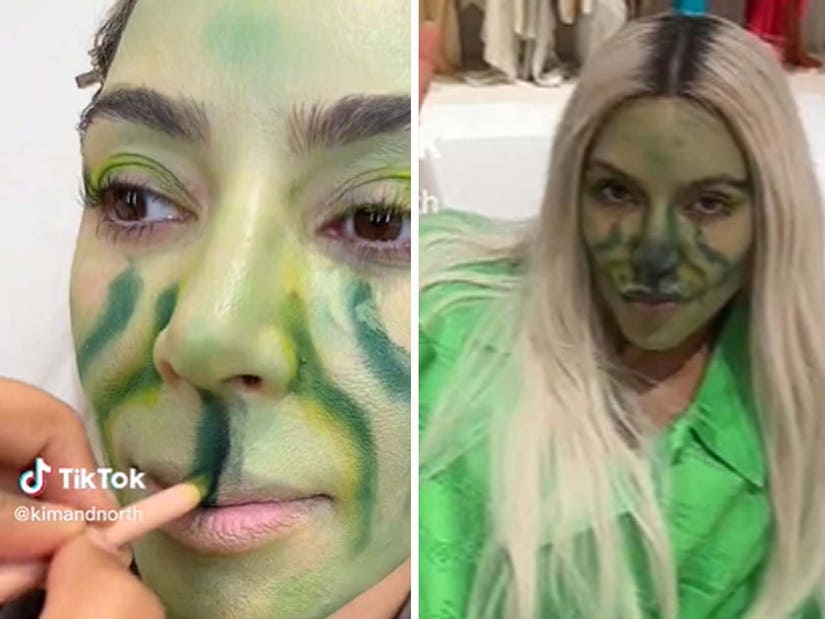 North West and Kim Kardashian are getting into the holiday spirit!

The 9-year-old showed off her makeup chops when she turned her 42-year-old mother into the Grinch in a video posted to TikTok on Monday, Nov. 21.

North first prepped the SKIMS mogul's face with a foundation base before she brushed over it with a light green eyeshadow. She then went in with a darker forest green shape to carve out the Dr. Seuss character's iconic snout and famous wrinkles. Kim's daughter, who she shares with Kanye West, added a yellow shadow to create definition and depth under the frown lines.

She finished the look with a green winged eyeshadow look by placing tape under the outer corner of Kardashian's eyes and added a green lipgloss. The reality star then changed into a bright green silky pajama top.

Kim posed and blew kissy faces to the camera as she lip synced to Thurl Ravenscroft's "You're a Mean One Mr. Grinch."

This isn't the first time North has shown off her special effects skills! Back in August, West transformed her mom into a minion character fully styled with a sparkly lip.

They captioned their video "Mommy Minion" at the time and featured North applying a neutral foundation base on Kardashian before applying yellow eyeshadow to her entire face. North then painted on round black glasses and completed the look with a shimmery blue and purple lip gloss. Admiring her daughter's work, Kim smiled and threw a peace sign to the camera.

Kim and North have geared up for the holiday season with multiple videos that have displayed their excitement for Christmas.

The duo took to their joint TikTok @kimandnorth last week to share a clip of themselves lip-syncing to Ariana Grande's Christmas hit "Santa Tell Me." The video showcased Kim and North sitting together and mouthing to the second verse of the song. North took the lead while Kim sang just a couple of lines before sweetly embracing her in a hug. 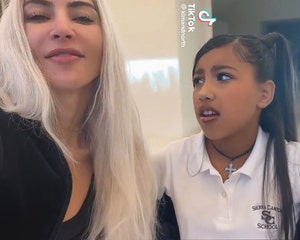