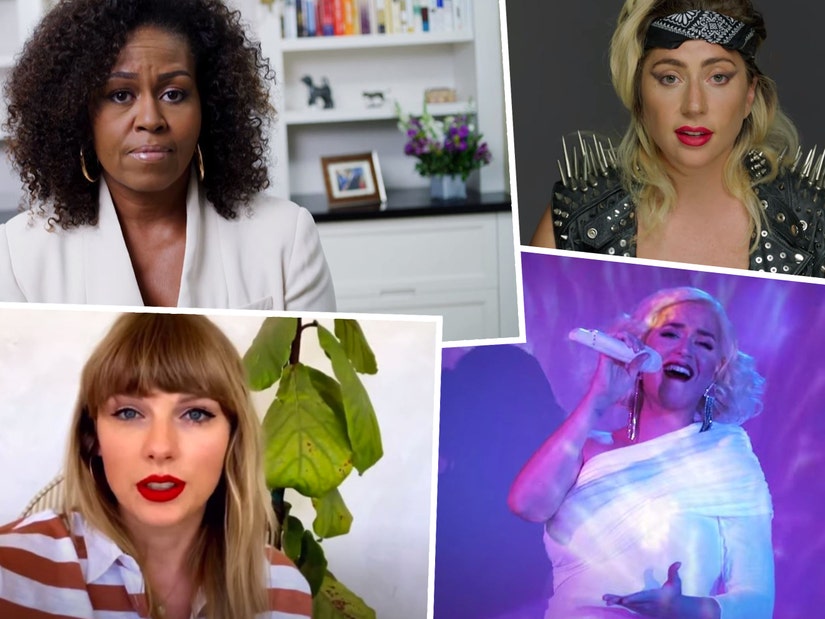 "If any of you are scared or confused or angry or just plain overwhelmed by it all, if you feel like you're searching for a lifeline just to steady yourself, you are not alone," said former First Lady Michelle Obama.

Although thousands of high school and college seniors across the country were unable to have a traditional commencement ceremony due to the coronavirus pandemic, thanks to a group of celebrities, famous figures, and inspirational leaders, the graduates were still given the special celebration they deserved.

On Sunday, YouTube hosted a four-hour virtual commencement event titled, "Dear Class of 2020," in which high-profile speakers shared their sendoffs to the graduates through heartfelt commencement speeches, inspiring messages, and even some awards show worthy performances.

Though several figures addressed the pandemic, others discussed the ongoing protests and nationwide unrest over the death of George Floyd -- and more importantly, how we move forward.

TooFab rounded up a few of our favorites from the livestream celebration, including former First Lady Michelle Obama, Lady Gaga, Taylor Swift, Katy Perry, and the cast of "Schitt's Creek" with a special appearance from Mariah Carey.

Check them all out, below!

Former First Lady Michelle Obama, who always seems to have the perfect advice for the younger generation, delivered an inspiring graduation speech in which she addressed the current state of the world and encouraged the graduates to practice activism beyond social media posts.

"Over the past couple of months, our foundation has been shaken," Michelle said. "Not just by a pandemic that stole too many of our loved ones, upended our daily lives and sent tens of millions into unemployment. But also by the rumbling of the age-old fault lines that our country was built on. The lines of race and power that are now, once again, so nakedly exposed for all of us to grapple with."

"If any of you are scared or confused or angry or just plain overwhelmed by it all, if you feel like you're searching for a lifeline just to steady yourself, you are not alone," she continued. "I am feeling all of that too. I think we all are." 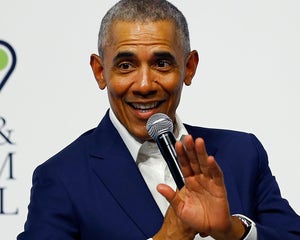 Michelle then proposed a series of thought-provoking questions about the reality of systemic racism in America.

"What's happening right now is the direct result of decades of unaddressed prejudice and inequality. The truth is, when it comes to all those tidy stories of hard work and self-determination that we like to tell ourselves about America, well, the reality is a lot more complicated than that," she explained. "Because for too many people in this country, no matter how hard they work, there are structural barriers working against them that just make the road longer and rockier. And sometimes it's almost impossible to move upward at all."

"Because what if you're required to work during a pandemic, but don't have enough protective equipment or health insurance from your employer, or paid sick leave?" she continued. "What is more essential: your work or your life? If you don’t feel safe driving your own car in your own neighborhood? Or going for a jog, or buying some candy at 7-Eleven, or birdwatching? If you can’t even approach the police without fearing for your life, then how do you even begin to chart your own course?"

Michelle concluded by sharing some life lessons for the class of 2020 on how to navigate this new reality moving forward, including activism beyond the world of social media.

Watch her full speech, above.

After Schitt's Creek's finest joined the Zoom call, Reid, who is also a professional singer IRL, led the group in an incredible rendition of Carey's ballad. However, towards the end of the Zoom performance, Carey joined the call to harmonize a bit with the group, shocking everyone, especially Levy, who, like his "Schitt's" character, is a known die-hard Carey fan.

"Moira, darling. I hope you didn't mind that I jumped in like that," Carey told the camera. "You all sounded so good, I had to get in on that."

"I think I'm having a heart attack!" Levy, as David, screamed at his computer screen.

Carey then shared a sweet message to teachers and students. Watch it all go down in the video, above.

On a more serious note, Lady Gaga shared a powerful virtual commencement speech in which she addressed the death of Floyd. The singer began by explaining how she changed her previously recorded speech that had "reflected the shared experience" of coronavirus to instead highlight the impact of Floyd's murder by using a metaphor of society as a forest and preaching the power of kindness.

"My speech was recorded before the murder of George Floyd and the subsequent activist movement," Gaga explained. "While my original commencement speech may not be directly relevant to what this country most needs right now, I wish to tell you today that though there is much to be sad about, there is also much to be celebrated. You are watching what is a pivotal moment in this [country’s] evolution…change will happen and it will be for the better."

“This forest is where we live. It's who we are. It's the morals and value system that we as a society have upheld for centuries," she continued, adding that we are being asked to "challenge" the system. "I believe in my heart that the people who are going to make this change happen are listening to this speech right now. You are the seeds that will grow into a new and different forest that is far more beautiful [than the one we live in right now]."

Taylor Swift expressed how she understands the class of 2020 possibly more than most as she too didn't get to attend her high school graduation.

"I wanted to say congratulations to all the graduates this year. I know this probably isn't the kind of graduation you thought you were going to be having. I relate to that in a lot of ways," Swift began. "When I was younger, I used to fantasize about high school graduation, and being with all of your friends, and cap and gown, and the whole thing."

"And then when I got to that point in my life, when graduation was coming up, I found myself on radio tour with my mom in rental cars, sitting on the floor of airports, and I ended up getting mailed my diploma," she continued. "It wasn't exactly what I pictured, but I was still very proud of it.

"One good lesson to come from it is expect the unexpected, but celebrate anyway," she concluded. "I'm so proud of you guys and I hope that you have a wonderful time and are really proud of yourselves."

A very-pregnant Katy Perry led the graduates in the tradition of turning their tassels from left to right before performing her latest single "Daisies" and an incredible rendition of her classic hit, "Firework."

These are just a few snippets of the four-hour YouTube livestream, which also featured appearances from Beyonce, Demi Lovato, Lizzo, Justin Timberlake, Gabrielle Union and her husband Dwyane Wade, former President Barack Obama and more. See more performances, speeches, and tributes in honor of the Class of 2020 in the full replay, below!