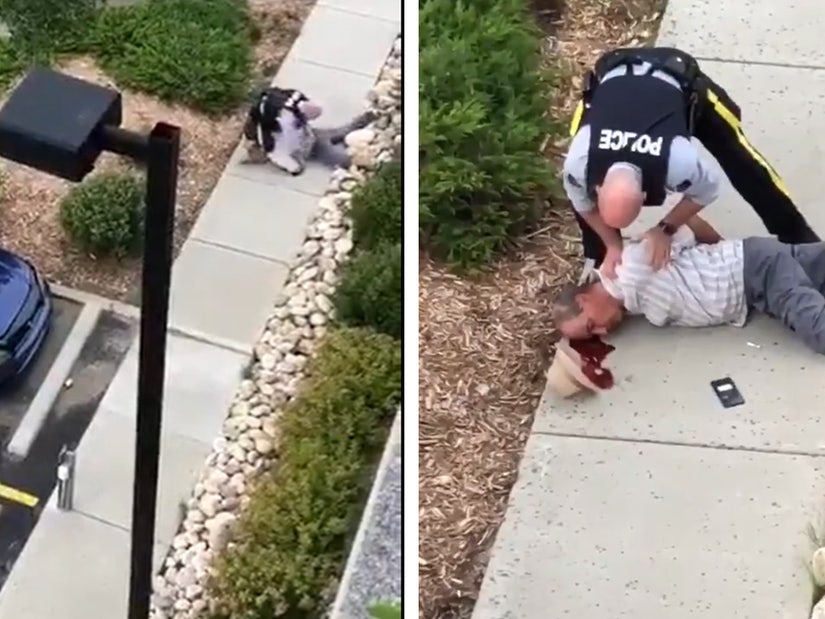 A second video shot beforehand showed the man being thrown out of Starbucks, before he allegedly punched a firefighter.

A Canadian police officer has been filmed smashing a man's head off the ground before kneeling on the unconscious victim's neck.

The harrowing 2-minute clip was posted to Reddit by a witness filming on her cellphone from a window above.

The footage doesn't show what led to the incident, which occurred in Sherwood Park in Alberta on Tuesday; it merely shows the officer approaching the man on a footpath and they briefly exchange words.

The RCMP officer begins leading the man away, who does not appear to be resisting at all. Then suddenly and without warning, exactly 25 seconds after approaching him, the cop places a leg behind the unsuspecting man and viciously hip throws him, smashing his head into the pavement with a sickening thud.

The man's groans of anguish can be heard over the recorder's gasp of horror, as the officer immediately kneels his full weight on the man's neck, in ominously similar fashion to the technique Minneapolis officer Derek Chauvin used in the killing of George Floyd.

Yesterday, an officer in Alberta, Canada used excessive force on an old man who wasn’t resisting, smacked his head on the ground, & kneeled on it pic.twitter.com/DuxO3ekYl7

"What did I tell you?" the Mountie can be heard asking the man, who now appears to be unconscious. He then pins his limp arms behind his back and handcuffs him.

It is at this point the person recording, even at distance, notices the large pool of blood forming under the man's head.

Zooming in, it is clear to see the man is seriously hurt as the blood continues to pour from his skull; but the officer just continues to hold down his motionless body, making no attempt to render first aid.

The footage cuts as a second officer arrives on the scene.

@StrathcoCounty is aware of the video showing the arrest yesterday in #Strathco #Shpk.

I'm in direct communication with Chief Commissioner Reid, & we're working to gather all the facts of the incident.

On Wednesday, Strathcona County Mayor Rod Frank said he was aware of the video, and that it was being investigated.

"I'm in direct communication with Chief Commissioner Reid, & we're working to gather all the facts of the incident," he said. "The RCMP are reviewing the matter & we expect their public statement soon."

Also on Wednesday, a second video began circulating on social media, purporting to show the man moments before the incident, being kicked out of a Starbucks.

In it, he can be heard arguing with a young female staff member, telling her and another customer to "shut the f--k up" before storming out.

The woman who shared the second video claimed the man punched a firefighter and a civilian in the face, and had been screaming threats at people in and outside her workplace.

"He was belligerently drunk and the officer told him to put his hands behind his back or he would take him to the ground," she said. "The man failed to comply so the officer did just that."

"Don't get me wrong, I STAND against police brutality," she added. "But this man threatened to kill my coworkers, our customers, and forcibly grabbed a teenage girl in our café. He was an extreme threat and has been multiple times to our store and refused to comply." 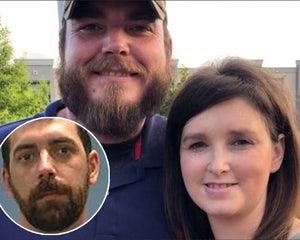