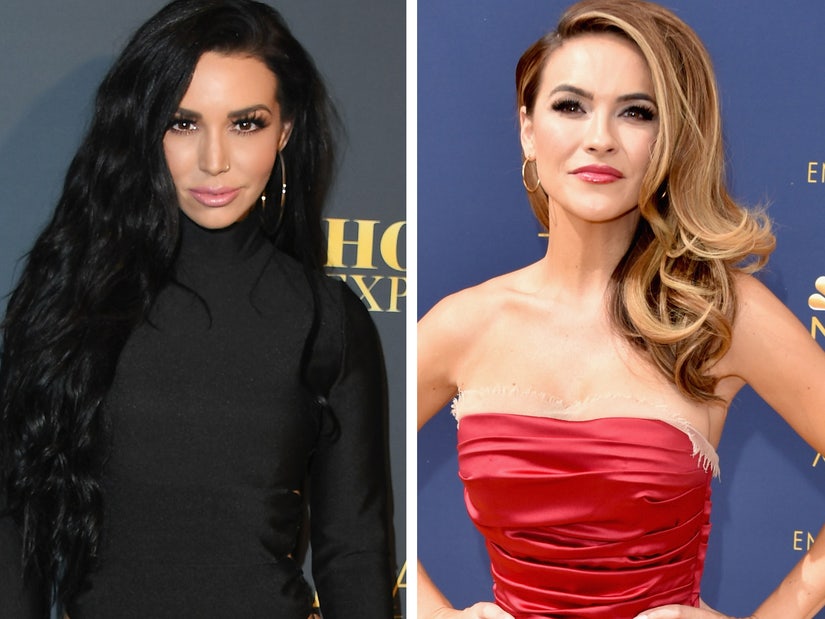 Stause allegedly called Scheana "so embarrassing" for the messages.

Scheana Shay and her podcast cohost Jamie Lynne used to be friends with "Selling Sunset" star Chrishell Stause -- but they claim she's not the woman she used to be and accused her of dropping her friendships with them both.

With Stause's costar Christine Quinn on the latest episode of their "Scheananigans with Scheana Shay" podcast, the two women opened up to their guest about their own volatile relationship with Chrishell.

In the new season of the Netflix reality show, Stause expressed frustration that ex-husband Justin Hartley allegedly ended their relationship without a conversation, something both Scheana and Jamie Lynne said Chrishell did to them.

Scheana claimed she and Chrishell were mutual fans of each other and followed one another on social media. They met after exchanging a few DMs and became friends. Jamie Lynne, meanwhile, said she had been friends with Stause since 2005 and their falling out was "really hurtful for me to talk about."

Though they were becoming "pretty good friends," Scheana said that all changed when she learned Chrishell's dog had been hit and killed by a car.

"I didn't have Justin's phone number, we weren't that close but I wanted to send her something and him and I follow each other on Twitter and so I sent him a DM," she continued. "I said, 'Hey, what's y'alls new address, I want to send something for Chrishell.' And he was just like ,'Oh, my god, that's so sweet. Thank you so much, really tough time,' and then he gives me the address and he's like, 'Hope to see you soon,' and I was like, Yeah, for sure.'

Scheana said she had also told Justin about her new boyfriend, thinking they would get along well, and invited Hartley and Chrishell to an upcoming New Year's Eve party.

"That was the extent of the conversation, that was it," she said. "She then twists this conversation to Jamie and was like, 'Oh my god, how embarrassing. Scheana texted -- no, it was a Twitter DM -- texted Justin, talking about how she and Shay aren't together anymore.' I don't remember what it was exactly, but it was, 'How embarrassing,' with like a bunch of monkey with the hands over the face."

Jamie said she saw the DMs, but didn't think there was anything "weird" about them. She then said she thinks Chrishell is "changing," telling Quinn that the version of Stause they know "is not the one I was best friends with ... she didn't care what people thought of her."

Jamie said her friendship with Chrishell ended after she called Stause out for "acting elitist," accusing her of claiming a promoter they both knew from NY "wasn't good enough to be at their table" at an event in Los Angeles.

"She just basically cut off 10 years of friendship because I was like, this is not true to your character," she added. "You don't just cut a 10 year friendship off because of that."

After Quinn said she could relate, Scheana claimed that "what [Chrishell] did to Jamie is basically what she's accusing Justin of doing to her."

Jamie claimed she reached out to Chrishell multiple times over the five years since she was cut off, but got nothing in return. Eventually, she ran into her at a party and confronted her, with Chrishell allegedly claiming she didn't get any of Jamie's messages and telling her to e-mail her business e-mail in the future.

Scheana then insinuated Stause either said or made them feel like she believed she was too good for them.

"I still follow her, I keep the peace. I've just kept the peace," said Scheana. "But for her to say now that Justin's like a big TV and movie star, she can't be seen with reality people. I was like, 'Bitch! You were just as much a fan of me as I was of you. We've all become friends but now because Justin's on 'This Is Us,' I'm not good enough for you to hang out with and you're gonna talk shit about me and give Jamie shit for being my friend?"

For her part, Stause told Us Magazine, "Chrishell has had a lot on her plate with what she has been through in the past year. Her focus is on the positive and about how women should uplift each other rather than tear each other down. She is moving forward and wishes them the best."