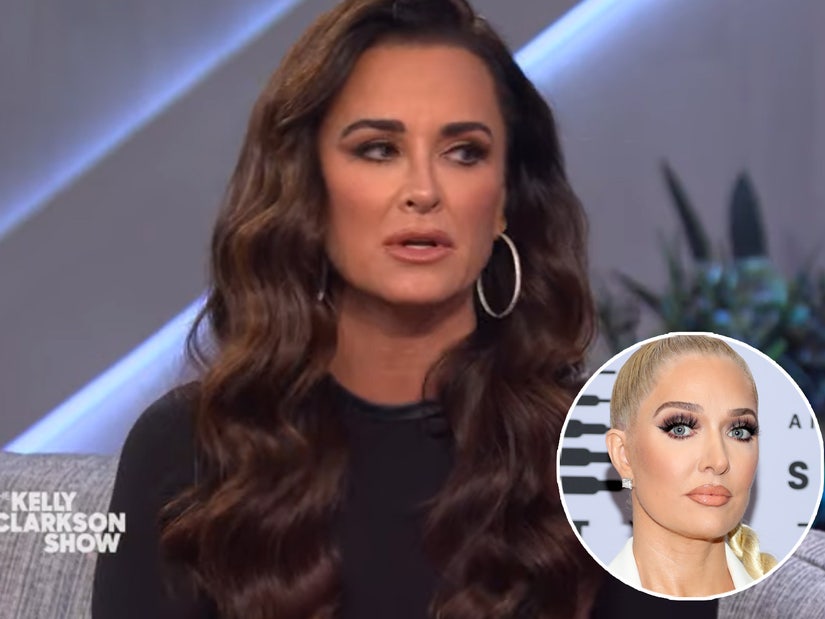 Kyle said she knew Erika was going to be "upset" when she saw Mauricio and PK laughing about her husband Tom.

Kyle Richards revealed where she stands with Erika Jayne after they wrapped the reunion episodes for this season of "The Real Housewives of Beverly Hills."

During her guest appearance on Monday's "The Kelly Clarkson" show where she chatted about her flick "Halloween Kills," the reality star was also asked by Kelly about the "little thing" she had with Erika and if the pair were "all good now."

ICYMI, Kyle, Kyle's husband Mauricio, Dorit Kemsley and Dorit's husband PK had a good laugh behind Erika's back at her wild stories about her estranged husband Tom Girardi on a recent episode of "RHOBH." The incident came amid the cast members constantly asking Erika about Tom's alleged misdeeds -- and Kyle making other comments behind Erika's back in confessionals.

"Well, she was upset," Kyle began. "We actually are good. There are things in the show that she saw this season that hurt her feelings. And we had a lot of questions -- it was very confusing."

"And then there was a scene where my husband and PK were kind of like laughing and they make me laugh and its hard -- like when you're in church or something and you're not supposed to laugh... we can't help it."

Kelly chimed in, "I laugh at inappropriate times all the time."

"Right," Kyle continued. "So that was kind of the thing. And I knew when she sees this she's gonna be upset. But we worked through things in the reunion."

After Kelly offered that friendships "in general are hard," Kyle quipped, "You think filming 'Halloween' was hard and scary... deal with these women for a day."

Kyle previously told TooFab she was most afraid of "the Erika stuff" headed into the reunion.

"It was just a big difficult situation to navigate through because there were so many questions and it was all unraveling in real time," she added. "It was confusing for everyone."

The teaser for the reunion showed Erika calling out Kyle and Dorit for the laugh riot at the expense of Tom. Check it out, below!