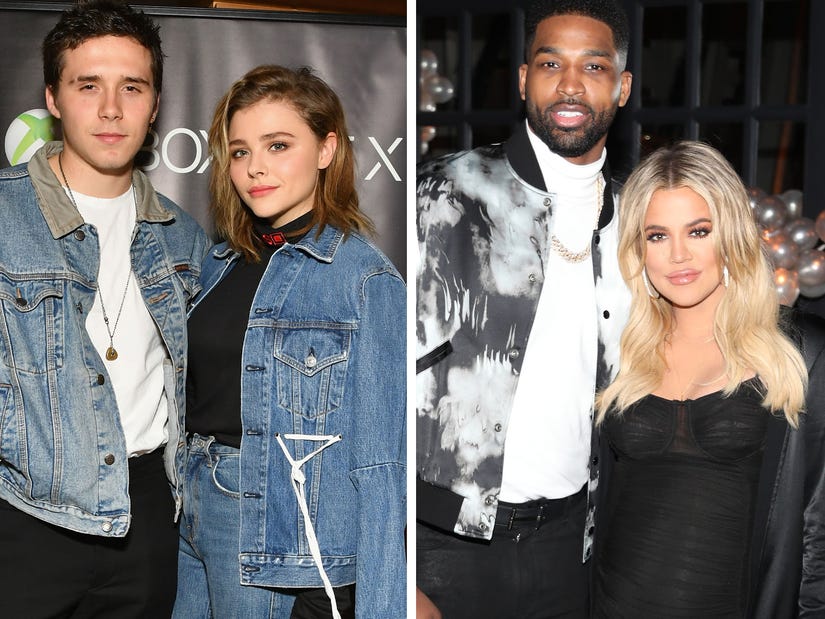 "It was very difficult and I'm happy it's over."

All relationships have their highs and lows -- and not even celebrity couples are exempt from hitting bumps in the road every once in a while. Sometimes those bumps can lead to a breakup…and then a make up…and then a breakup again. This cycle of splitting and getting back together has proven to be pretty common in Hollywood, leading to on-and-off relationships for quite a few celebs. While these famous couples have tried to make it work more than once, they've also realized that sometimes things just aren't meant to be.

Here are some celebrity couples who broke up more than once…

Selena Gomez and Justin Bieber's relationship has notoriously been on-and-off throughout the years. After first being linked in 2010 and later making their red carpet debut at the 2011 Vanity Fair Oscars Party, the couple went on to date for nearly two years. Their first split came in November 2012 -- although it didn't last long. The couple were back together by early 2013 and over the next few years, it became hard to keep track of whether they were together or not. In 2016, they took a long break while seeing other people. Ultimately, the pair got back together one final time in 2017 before calling it quits for good.

"I had something beautiful and I would never deny that it wasn't that. It was very difficult and I'm happy it's over," Selena said of her song "Lose You to Love Me" about the split. "And I felt like this was a great way to just say, you know, it's done, and I understand that, and I respect that, and now here I am stepping into a whole other chapter."

Megan Fox first got together with Brian Austin Green in the early 2000s. By 2006, they were engaged -- but they never ended up walking down the aisle. In 2009, they called off their engagement, with Megan later admitting marriage wasn't "realistic" for her at 23. But by the following year, the pair were back together and shortly after confirming their relationship, they tied the knot.

The couple went on to welcome two children but ended up calling it quits once again in 2015. While they filed for divorce that June, by April 2016, news broke that Megan was pregnant with the couple's third child. Megan went on to give birth in August and the couple eventually called off their divorce. While they remained together for several years, they ultimately split for the final time in 2020.

Miley Cyrus and Liam Hemsworth dated on-and-off for a decade -- and were even married at one point! After meeting on the set of “The Last Song” in 2009, they began dating and were engaged by 2012. But a year into their engagement, they called it quits. Miley went on to date Patrick Schwarzenegger but after their split, she and Liam reunited in 2015. By 2016, it was clear that the couple had decided to get engaged again after Miley was spotted wearing a massive diamond on her ring finger. In December 2018, the pair made things official by tying the knot in a small ceremony at home. Unfortunately, shortly after the 10-year anniversary of the first time they began dating, they decided to call it quits. They filed for divorce in August 2019, citing "irreconcilable differences."

"Liam and I have been together for a decade. I've said it before & it remains true, I love Liam and always will. BUT at this point I had to make a healthy decision for myself to leave a previous life behind. I am the healthiest and happiest I have been in a long time," Miley wrote on Twitter after the split.

Bella Hadid began dating The Weeknd in 2015 after they connected when he asked her to be on his "Beauty Behind the Madness" album cover. While Bella declined the opportunity, they began hanging out and started dating shortly after. The duo traveled the world together and even got a dog but in 2016, they split after a year and half of dating.

In November 2017, about a year after their first breakup, rumors surfaced that they were spending time together again. Although they didn't immediately confirm things, they were spotted packing on the PDA on several occasions. Finally in October 2018, they made things Instagram official. Unfortunately, the couple called it quits a year later in August 2019.

Khloé Kardashian has had a tumultuous relationship with Tristan Thompson throughout the years, splitting and getting back together several times. The couple began dating in 2016 and by December 2017, they shared that they were expecting their first child. Unfortunately, during Khloé’s pregnancy, rumors surfaced that Tristan had been unfaithful. They went on to welcome their daughter True and seemingly stayed together -- but in February 2019, Tristan’s infidelity came to a head. When it was revealed that he had cheated with family friend Jordyn Woods, Khloé ended things.

Later that year, Khloé admitted she was trying to work through things with Tristan and trying to be the best co-parents they could be. It wasn't until 2020 that the couple gave things another try romantically. Things appeared to be going smoothly and the couple even considered welcoming another baby. Tristan secretly proposed in early 2021 and Khloé accepted. But things took a turn in December when news surfaced that Tristan was expecting a baby with another woman, just days after the couple decided to move forward with their own pregnancy via a surrogate. Khloé ended things once again and while she says she's forgiven Tristan, they have not rekindled their romance.

After meeting the set of "Gifted," Jenny Slate and Chris Evans became fast friends. The pair eventually began dating, revealing they were a couple in July 2016. They ended up splitting a year later, announcing their breakup in February 2017. But later that year, the duo were caught flirting on Twitter and by November, they were back together. Unfortunately, their reunion wasn't long-lasting and in March 2018, they split for the second and final time.

Brooklyn Beckham and Chloë Grace Moretz were in a self proclaimed "off-and-on" relationship for quite a few years. The pair were first spotted together in 2014 and while they were friends for some time, they didn't confirm their relationship until 2016. Unfortunately, just months after going public, they ended up calling it quits. The split wasn't long-lived though as the couple was reported to be back together by early 2017. They went on to date for another year before going their separate ways for the final time.

"Breakups are hard across the board. But when every verified account on Twitter posts something about me, I get tagged. And every major publication is verified," Chloë told the Sunday Times a few months later. "So anytime they post something about a certain relationship, it pops up on my phone, which is how I find out about 90% of things."

Zayn Malik and Gigi Hadid's relationship spanned for nearly six years, during which they broke up and got back together a few times. After first being spotted together in November 2015, the couple made things Instagram official in December. Over the next two years, Zayn and Gigi were spotted on numerous occasions, appearing in magazine spreads and even starring in a music video together. But in March 2018, the couple announced they'd called it quits.

Just a month later, the pair were spotted back together and they went on to date through 2019. In January of that year, they split again and went on to see other people. Zayn and Gigi ended up reuniting for a third time in January 2020 and ended up getting more serious than ever. In April, they announced they were expecting their first child and later that year, Gigi gave birth to their daughter Khai.

Things were going smoothly for the new parents for quite some time, until October 2021, when Gigi's mother Yolanda accused Zayn of shoving her during an argument. While Zayn denied the accusations, Gigi and Zayn ended up splitting again.

After collaborating on their song "Him and I" in 2017, G-Eazy and Halsey began dating. They made things Instagram official that September. Over the next few months, the couple spent a lot of time promoting their new song and hitting the red carpet. Unfortunately, they called it quits in July 2018, announcing on social media that they were taking time apart.

The pair reconnected later that year and confirmed romance rumors when they stepped out for the American Music Awards red carpet in October. Unfortunately, their rekindled romance was short-lived as they split again later that month.

"The biggest lesson I learned was to make art, not headlines," Halsey later told Glamour. "Because it can become quite easy, in the social media generation, to go from being a musician to becoming a personality."

Rachel Bilson and Hayden Christensen first met on the set of "Jumper" in 2007 and by late 2008, they were engaged. After more than two years together, the couple ended up calling off their engagement in 2010. But just a few months later, the pair got back together and went on to date for several years. They welcomed their daughter in 2014 but unfortunately ended their relationship again in 2017.