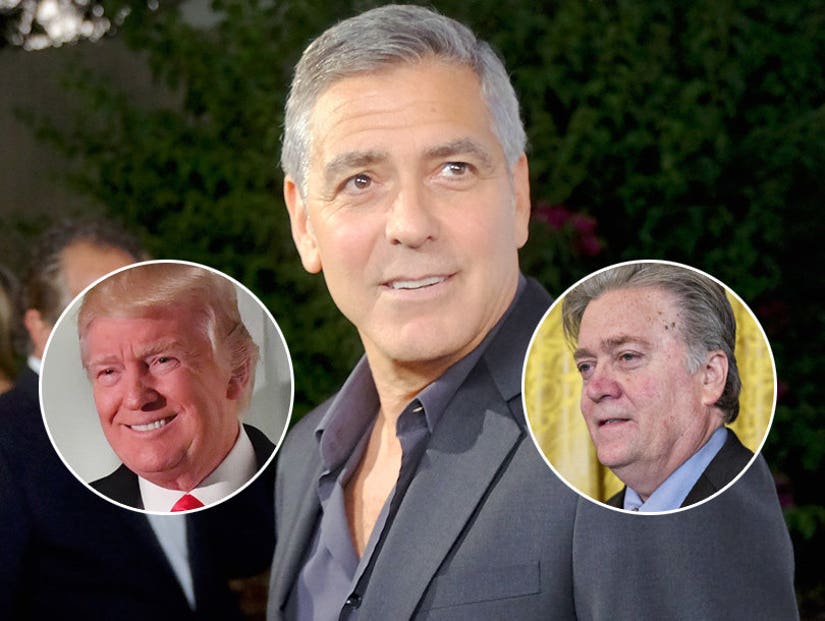 George Clooney stood up for Meryl Streep's right to speak out against Donald Trump at the Golden Globes earlier this year, and bashed the President and his advisor Steve Bannon in the process.

"[Trump] collects $120,000 a year from a Screen Actor's Guild pension fund - he is a Hollywood elitist," Clooney said. "Steve Bannon is a failed film writer and director. That's the truth, that's what he's done. He wrote a Shakespearean rap musical about the LA riots that he couldn't get made, you know, which is a shock. He made a lot of money off 'Seinfeld.' He's elitist. Hollywood."

Clooney, who is expecting a set of twins with wife Amal Clooney, appeared on the French program to in wake of being honored at The Caesar Awards in France over the weekend, and he was more than happy to set aside his career achievement to talk about the U.S. politics.

"We have a demagogue in the White House," Clooney said. "We need the fourth estate, which is journalism to hold his feet to the fire. They didn't do a very good job during the campaign and they haven't done a particularly good job yet, but those things will change."

"One thing that I'm always very proud of is, we tend to do a lot of dumb things over time, but we're also pretty good at fixing them," Clooney said. "Now we have Donald Trump, which is hard to imagine, it sort of catches in your throat... But we'll fix it. We have to. We have to make fun of these situations. Humor is important."

With the Oscars right around the corner, expect jokes from host Jimmy Kimmel at Trump's expense on Sunday, as well as more A-list stars following in Streep's footsteps by speaking out against the President's controversial policies.