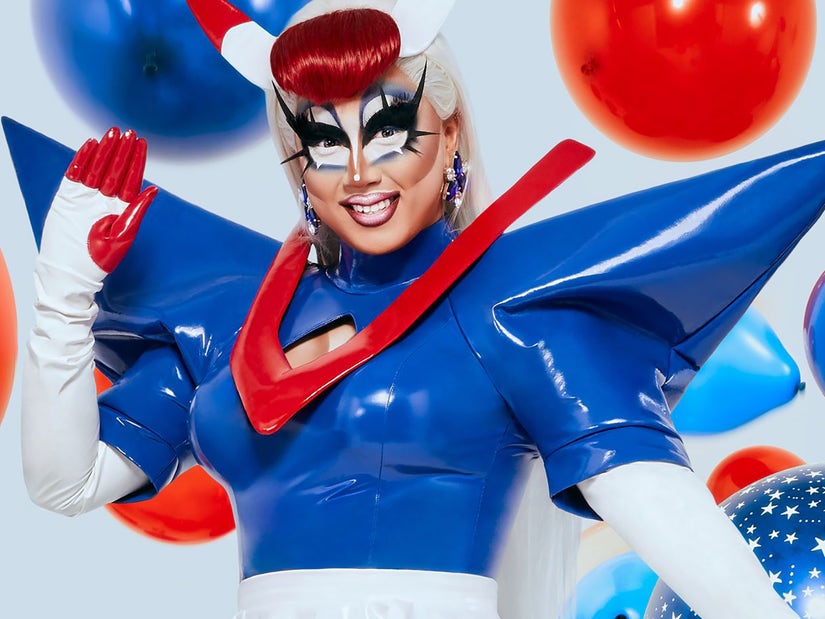 The reality star chose to come forward after the shooting suspect reportedly told police he has issues with "sexual addiction" -- it is not clear if any of the establishments he fired upon are places where sex work happens, or if any of his victims were sex workers.

As the motives behind the tragic shootings in Atlanta that resulted in eight people dead and one seriously injured on Tuesday remain unclear, one "RuPaul's Drag Race" star opened up about their own past.

The Season 12 contestant, who goes by the drag name Rock M. Sakura, revealed that she used to make her living as a sex worker. She is also of Southeast Asian descent herself, and her stage identity is heavily influenced by anime and Asian culture, giving her more than one personal connection to possible motives being discussed for the shootings.

The reality star chose to come forward on Wednesday as questions were spreading about possible racial motivations behind the shooting (six of those killed were Asian), as well as motives related to sex and sex work.

The suspect has now been charged with murder and aggravated assault in relation to the shootings at three separate massage parlors. The Cherokee County Sheriff's Department further said that the suspected shooter has admitted to the shootings, but denied that they were in any way racially motivated.

"He apparently has an issue, what he considers a sex addiction, and sees these locations as a temptation for him that he wanted to eliminate," said Captain Jay Baker in a news conference.

It is unclear at this time if sex work was something that happened at any of those establishments, or if any of the shooter's victims were sex workers.

According to Atlanta Mayor Keisha Lance Bottoms, the parlors were operating legally and were not on any law enforcement radars. She further insisted that there would be no "victim blaming, victim shaming."

It's this that Rock M. Sakura was hoping to combat by coming forward as a former sex worker herself "specifically working with massage" until she debuted on the show. At least, perhaps, she might be able to help ease the stigma and backlash that is so often associated with sex work.

In a lengthy series of tweets, the drag queen admitted that she was scared about revealing this part of her life -- and even lied about it during her time with the show -- but felt it was nonetheless necessary to come forward now. She emphasized the importance of stopping Asian hate and protecting sex workers.

She also appears to make the assumption that the victims of these tragic shootings were, in fact, Asian sex workers, but that has not been determined to be true by law enforcement at this time.

She then made a plea for supporters of drag and the LGBTQ+ community to stand up and "help protect our community right now. Please keep Asian people safe."

She also made sure to emphasize that she has no regrets or shame about having done sex work in the past or about talking openly about it now, though she admits she is aware that this could have negative repercussions for her.

She also made sure to emphasize that she has actually never been threatened with being blacklisted, but was rather working from a place of fear. "The stigma of sex work made ME believe that would be a consequence," she said.

You can check out her full story below:

2/13 if people will leave the fanbase, or send me hate messages, unsubscribe or whatever. Because I don't think those things matter right now.
With the violent crimes that have been affecting the Asian community as of recently and the hate crimes that were committed last night

4/13 from the community,and my fanbase,because of fear of being blacklisted from things like tv appearances and all stars,slut shamed publicly,or losing job opportunities in different countries (I was never threatened or told I was) . I remember feeling shame during DR when asked

6/ 13
But right now people need to see, need to hear, and need to know that we need to #stopasianhate , and protect sexworkers. What happened last night was
exactly what it looks like. A hate crime against Asian people.

I have often distanced myself from talking about matters involving myself sexually, tried to distance myself from thirst baiting,

10/13
How scared I am right now. After this tweet, I hope you will all respect me enough
to understand that I will talk about this further if I want to. But, also know I don't regret doing sexwork and I don't feel shame now that I've come out publicly and said it.

12/13
and it has been so wonderful being with you all. I hope that you can all support me, I really do. Please support the families of victims, in anyway you can.
I'm going to log off social media for a while because this post has been giving me anxiety all day.

13/13
I'll be okay, and I'll be safe.
Please take care, and remember to love yourselves.

This is a ps after reading everything: I was never threatened to be blacklisted or anything from anywhere. EVER. The stigma of sex work, made ME believe that would be a consequence.