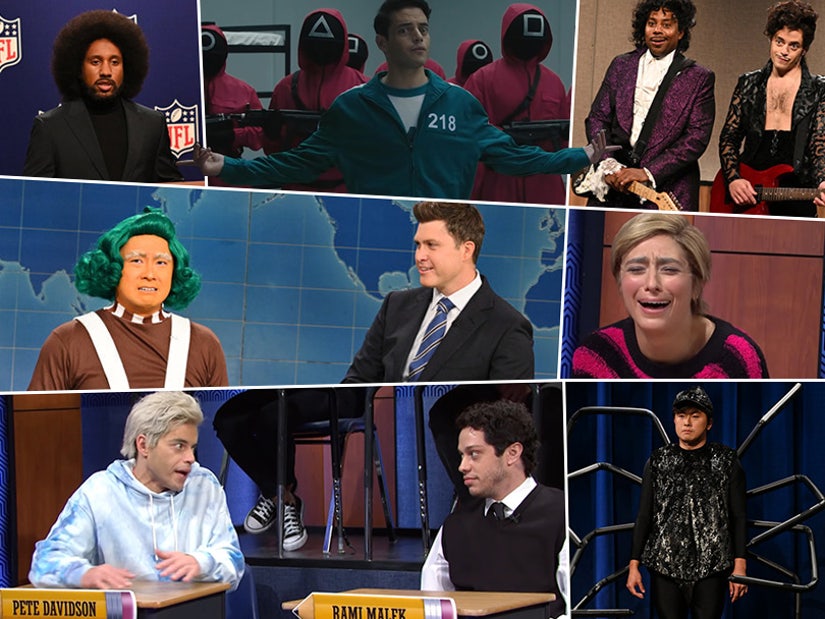 The strongest episode of the season skewers John Gruden, "Squid Game," "Scenes from a Marriage" -- and three of the best sketches didn't even make it to air (luckily they hit YouTube)!

We knew Melissa Villaseñor was a master impressionist, but she was on another level impersonating former "Saturday Night Live" alum Kristen Wiig. Even better, she got to do it opposite Kenan Thompson, who worked with Wiig most of her tenure.

With each episode this season, "SNL" has gotten stronger and funnier, and this week was no exception. Rami Malek brought a depth of performance and character work to the episode we've not seen before, allowing the writers to find comedy outside of impressions. 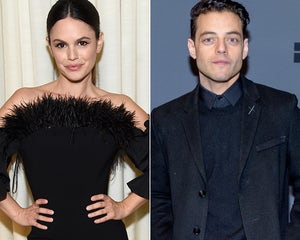 Of course, we say that in an episode where we got some of the best impression work of the season, including the aforementioned Wiig impression in a sketch that also featured Pete Davidson and Rami impersonating each other in a hilarious exchange.

Throw in random impressions like Chloe Fineman's spot-on Jennifer Coolidge, Bowen Yang's "Oh My!" George Takei and James Austin Johnson's startling Adam Driver and it's clear this cast is doing some of the best impression work we've seen here in years. The show didn't even need Rami's 007 co-star Daniel Craig to surprise us with two appearances, though he was fun in both.

The night kicked off with a takedown of the latest NLF scandal, with James again appearing early in the show, this time with an impressive John Gruden impression. We got the best "Update" yet, with Bowen again stealing the whole segment in over-the-top makeup.

And somehow three of the absolute best sketches of the night never even made it to air, including the second installment from the comedy trio (that's joined the writing staff) "Please Don't Destroy." This time, they were joined by Rami for one of those immersive character pieces that was just brutally hilarious.

Throw in an equally immersive "Squid Game" parody piece that's funnier the more familiar you are with the Netflix juggernaut, and this episode was on fire from top to bottom. 47 seasons in and "SNL" can still deliver! 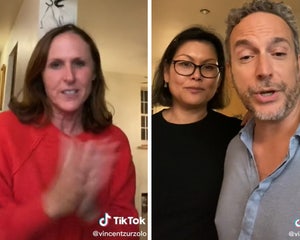 Unfortunately, this piece about Jordan Peele (Chris Redd) auditioning actors for his Prince biopic delivered an unworthy and terrible twist, though we did appreciate Daniel Craig’s surprise appearance as a prince, instead of the Prince. We’d have much rather he and Rami Malek play off of each other more in a shared scene. The best thing about this was probably Rami’s costuming, as he really did look a lot like the purple one. Other than that, though, it fell flat.

After a reputation as a bit of a stiff, Rami’s mission here was to disarm the audience and get us on our side, and we have to say he pulled it off really well. We enjoyed his whole villains monologue, slyly sympathizing with their plights, as well as his story about his upbringing and even toying with us about swapping places with his twin. He came across as a little reserved and quirky, but likeable … and that’s a pretty good formula for “SNL” success!

A round robin of escalating silliness as “SNL” took on the NFL and the John Gruden scandal. Once again, James Austin Johnson got a prominent role, portraying Gruden himself as he tried and failed to defend his controversial emails. From there, we got a series of new head coaches for the Raiders as each one resigned during the press conference, an update on Washington’s team name (you know, ‘cause the last one was racist) and the sense that everyone was having a lot of fun with this one -- except perhaps Chris Redd’s Colin Kaepernick -- who maybe warned everyone the NFL had this problem.

A perfect closing sketch, this was absolutely bizarre character work, as well as the first showcase for Aristotle Athari. He was absolutely immersed in the role in a way that was both compelling and utterly ridiculous. Rami Malek joining him on stage as an equally weird dancer somehow worked perfectly. Like Daniel Craig, the bit was a slow burn for us, but it was one of those ridiculous things that grows on you as it progresses, and thankfully ended at just the right time.

A showcase piece for Bowen Yang, as a middle school kid dressed as a “Daddy” longlegs spider, emphasis on the “Daddy.” Rami dropped some terrible rapping in the middle, while Kenan Thompson and Heidi Garnder were the horrified -- yet compelled -- principal and teacher, respectively. A minor mishap with a leg didn’t slow Bowen’s roll, who played this role to the hilt. It was obnoxious and adorable all at the same time.

At this point, “SNL” figures enough of us know what “Squid Game” is they can just play off of it as if it’s the inevitable result of a life lived through country music. After all, who’s more down on their luck and lost than a lovelorn country music singer who had to give up everything. After all those hip-hop tracks, who knew Pete Davidson could deliver a believable country vocal. Rami Malek was the real surprise, with a lovely and smooth voice of is own. This was definitely an ode to the Netflix juggernaut, as well as a pretty solid promotional piece for people to check it out. And damn if it’s not catchy, too!

Riffing off of recent films that explore marriages going off the rails, like “Scenes from a Marriage,” “SNL” asks us why we would ever want to watch these Oscar-bait films? Heidi Garnder and Rami Malek really commit to the emotional turmoil of these characters, with great comedic twists coming from the melodrama. It’s dark, unpleasant and really does make you wonder why they don’t just get a divorce if they’re this damned miserable.

This comedy trio is turning into a strong addition, and we enjoy the behind-the-scenes angles they provide. In this one, they meet up with the host to talk sketch ideas only to instead have to deal with the fact that he figures he deserves a treat because he’s been on good behavior all week. No treat? How about bad behavior. Everyone does a great job as the absurdity ratchets up bit by bit before an emotional reveal. Nah, it’s all ridiculous, but definitely good fun.

Props to the writers for coming up with a more clever way to showcase some celebrity impressions from the cast -- and shame on the whole show for withholding that Melissa Villaseñor Kristen Wiig impression; she’s incredible! The clear highlight, though, was having Pete Davidson and Rami Malek play one another, with Pete so subdued as to be almost catatonic, while Rami brings Pete’s more animated mannerisms to life beautifully. The game show format works well, with celebs being predictably stupid about real questions, unable to get over their schticks. This was a random laugh riot throughout.

Another great character piece, with Rami Malek and Cecily Strong great as Air B-n-B hosts desperate to earn Superhost status. We were also impressed that Rami only broke once as this sketch was totally obnoxious in all the best ways. Each revealed detail as it went along made it better and better. Honestly, this would work extended into a movie taken seriously or as parody. A fun and clever premise executed beautifully.

Covid infertility, Buttigieg paternity leave and Biden running late to everything to appeal to Black voters? The first joke set was pretty hit-or-miss from Colin Jost and Michael Che. Colin won the audience back over by revealing one of Che’s awful emails, which changed the energy of the whole segment in the right direction.

Uh-oh, Colin just accidentally outed Bowen Yang’s “proud gay” Oompa-Loompa, who’d come out to talk working conditions under Willy Wonka. Bowen was absolutely on fire with this piece, working through the emotions of being outed, and his mission to fight for the rights of his fellow workers. As good as he is in sketches, Bowen seems to always shine brightest at the “Update” desk. 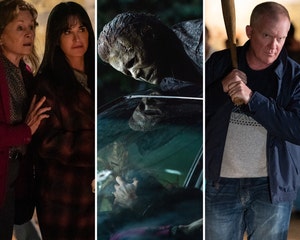 From the streaming wars and Superman’s new bisexuality, the second news segment was all over the place, with Che’s trickle-down method for trying to save Reagan’s ranch from wildfires earning particularly strong laughs -- it was a good joke, y’all! Later, he defended a crass joke about pregnancy as a “math joke,” which cracked Colin up.

A hilarious callback to a Chris Redd commentary from February 2020 -- pre-Covid -- saw Chris try desperately to talk about everything but what he said then. We love that this was a real clip that he had to now defend, and his characterization throughout. Actually, the interplay between his random nonsense and Che trying to get him on track was fantastic and beautifully evasive. Blimps?!

We weren’t thinking this bit was going to be funny at all, but Kenan’s inability to keep himself together as Mikey Day’s hypnotist woke him up and put him to sleep with increasingly ridiculous scenarios had us dying. Che’s desperate move at the end was the perfect capper to the segment and the funniest “Update” of the season, with all three guests nailing it and most of the boys’ jokes landing, as well, after a slightly rocky start.

A couple tries out mattresses but the play-acting goes way, way too far. Bowen Yang proved he can do great reaction play with a subtle performance opposite the masterful lunacy of both Rami Malek and Aidy Bryant as the aforementioned couple trying to find the perfect mattress by laying in them -- and acting out their marital troubles. Wow, did this one escalate into both expected and totally unexpected directions with everyone bringing their absolute best. This was an absolute laugh riot from the jump that only got funnier and funnier. 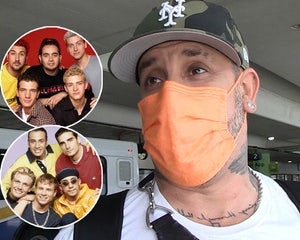 Backstreet Boys Vs NSYNC: Who Aged the Worst? AJ McLean Weighs In (Exclusive)

Adding in all three of the cut-for-time sketches, you get a great showcase night for Aidy Bryant, as well as Heidi Gardner. Kenan Thompson was well-used throughout the evening, as was Chris Redd, who was brilliant as both Colin Kaepernick and himself on “Weekend Update.”

But there was no denying that Bowen Yang was on fire tonight, so this one has to go to him. Yes, the George Takei impression was perhaps expected, but he still delivered it with real panache and charm. Less expected was his killer Oompa Loompa moment and his scene-stealing Daddy longlegs.

What really sealed it for us, though, was how well he played the straight man to Rami Malek and Aidy’s increasingly obnoxious behavior in the mattress store sketch. He was able to get laughs by playing it low-key, which is a testament to his versatility and how funny he is.

He’s got such a bright future, it’s no wonder he’s the first “SNL” cast-member to get an Emmy nomination while still a Featured Player. At this rate, he could be well on his way to another one -- this episode might even be worth submitting for consideration unless he tops it later in the season. 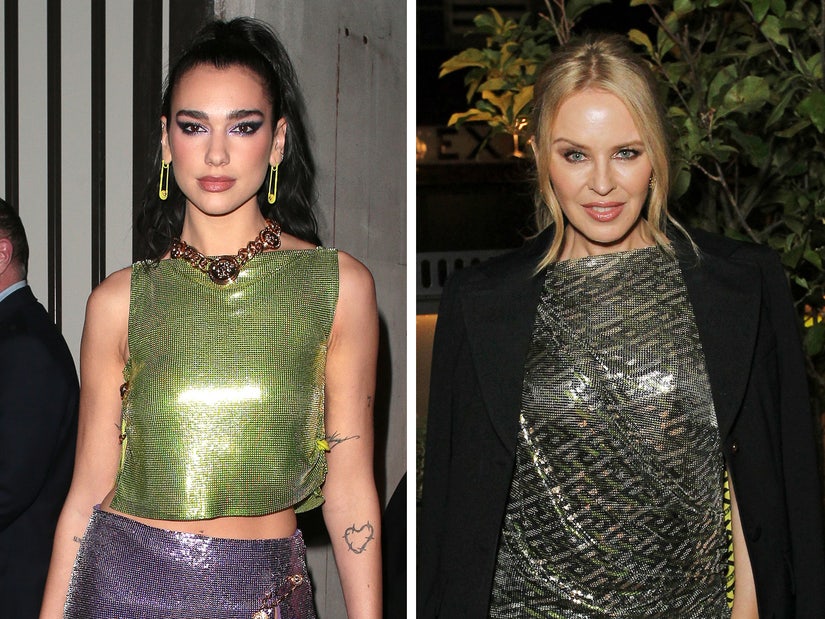