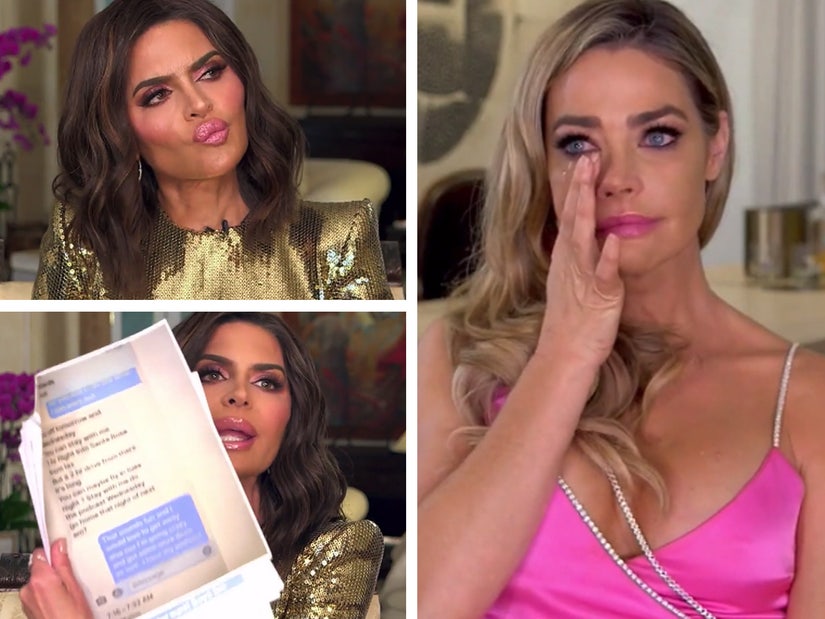 Richards pushes back against backlash to Aaron hand-crushing moment and Rinna's "low" blow about Heather Locklear, while also explaining her legal action against Brandi and Bravo.

Denise Richards spent a good chunk of Tuesday's final episode of "The Real Housewives of Beverly Hills" reunion literally ready to run out the door.

Shoes in hand and tears in her eyes for the last quarter of the episode, Richards' final appearance on the show before she quit last week was rough, to say the least.

The hour began with Denise calling it "really f--king shitty" of Teddi Mellencamp-Arroyave to bring up Brandi Glanville's claims they had sex in front of everyone at a group dinner in Italy. Lisa Rinna said it was actually Brandi who said it on camera first, leading to the first showdown between the two former friends of the night. 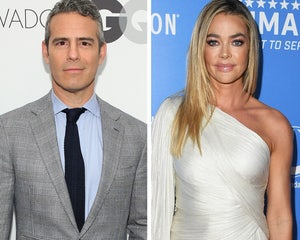 "Lisa, stop! Be quiet please. You need to be quiet," Denise shouted. "Brandi was not at that dinner. Teddi was. She knows the consequences of what that does."

As host Andy Cohen said it felt like Richards possibly "mischaracterized" her relationship with Glanville, Denise was adamant she did not. "She is an acquaintance. She's a train wreck, she's not stable, she drinks a lot," Richards interjected.

Cohen pushed on, saying Brandi was "very specific" in her allegations, including details about Denise's hotel room she'd only know had she stayed there.

"She knocked on my door and I let her in while I grabbed my stuff to go out. She didn't stay with me, Aaron was there the whole time," claimed Denise. "I do not have an open marriage. If I had an open marriage, I would say it."

When Sutton Stracke chimed in, saying she heard a similar rumor about Brandi and Denise in 2018, Richards said she didn't even know Glanville then. "Oh, yes you did!" shouted Rinna, as Richards denied it again.

For what it's worth, Lisa is correct here, as the first trailer for Season 9 of RHOBH -- released in December 2018 -- showed Denise and Brandi's first on-camera meeting, meaning it was filmed earlier that year.

Andy then brought up the numerous text messages Brandi showed the other women as proof she and Denise were close. "I believe my text thread between Brandi and I [is] very different," Richards claimed -- and, again, Rinna was ready to pounce.

Pulling printouts of Brandi's texts from below her chair, she shouted, "I don't like bullshit. Let's go through it!"

"You better be careful saying this, because yours will be shown, too," Denise hit back, as Lisa asked, "Are you threatening me?"

Richards went on to say she'd "absolutely" be willing to show her side of things, only if Rinna was okay with her own texts being exposed as well. "It's not about me and those are private," Lisa replied. "Denise, it is about you and Brandi. Is she being muzzled? Did you send a cease and desist to Brandi to shut her up?"

Andy saw that as a good entry point to ask about the cease and desists Denise's legal team sent after Brandi's claims were first revealed. Dropping the text message convo entirely, he asked what really went on there.

"The cease and desist was against Brandi to make her tell the truth to all of you," said Denise. The subject came up again when both Denise and Garcelle Beauvais were asked why they didn't travel to NYC with the other women to see Erika Jayne's "Chicago" debut -- as Andy said, "I was told, at the time, you were suing us."

"I wasn't suing anybody. I sent a cease and desist to Brandi and we also sent something to Bravo to ask if they could remove the footage because she was not a cast member and it wasn't true and that was the extent of it," Denise explained.

After Kyle Richards said the women want honesty all around, Andy noted that Denise was sharing "her truth." Added Denise, getting emotional, "You guys aren't accepting that, so where do I go from here? Sometimes you women don't accept honesty and you think someone's lying. That's where it's like, that's what's hurtful."

Talk eventually turned to Denise's husband, Aaron Phypers, who went head-to-head against the women -- especially Teddi and Erika -- throughout the season. While Dorit Kemsley's husband PK appeared on a previous reunion to squash his drama with Erika, Aaron did not do the same this time around.

"No one else's husband's here, I think it would be a no win situation," explained Denise, after Andy said he had been invited to participate. Erika laughed, exclaiming, "We're like six women, we're not six Mike Tyson's. Give me a break."

Cohen noted the show got a lot of reaction after Aaron's blowup at Kyle's picnic. As Denise pulled him out of the party in anger, he was heard under his breath telling her, "Don't tell me what to say. I'm gonna crush your f--king hand, stop it."

"I didn't even know that either, I played it for him and he said, 'I don't even remember saying that. I don't know why I would say that, because I'm afraid of you,'" Richards said after the footage aired. She clarified he meant he was afraid in a joking way.

Sutton, however, simply said, "Zero tolerance" when asked her reaction to the clip. Added Garcelle, "I saw it on social media. I was worried."

The rest of the episode was focused on the deterioration of Lisa and Denise's friendship, with Richards walking off camera saying she needed something to eat after Cohen asked them both to explain how the other has changed.

She returned, shoes and papers in hand, saying, "I'm done. I have to go to work tomorrow."

"If you're so unhappy, why don't you just go do 'Bold and the Beautiful' and stop doing this show?" Rinna asked her. Replied Denise, "I'm not unhappy at all. I don't like that a former friend is behaving this way and treating me like this, but I'm not unhappy. I've enjoyed this show, I've enjoyed getting to know all these women."

Richards stayed for the rest of the reunion, but looked like she was ready to walk out the entire time, often collecting her things like she was going to leave.

When the Brandi texts came up, again, Denise warned Lisa that "you have told me a lot of stuff about her" -- something Rinna had no problem owning. "I don't like Brandi, that is clear as a bell," she said. "Brandi knows I don't like her. I've been nice to Brandi lately because she has come on to try and tell her side of the story."

Andy asked Rinna whether she would give Denise the heads-up about the Brandi allegations if she had the chance to do the season over again. Her biting response: "I would have not had Denise come on the show if i were to do it over again ... how about that?"

Lisa went on to say she and Denise didn't speak in the six months after filming their last scene together. "I go back to when she was friends with Heather Locklear," she began, as Richards cut her off.

"I actually wasn't, Lisa, and you know that. To bring that up, really?" said Denise, shocked. "She was friends with my ex-husband. Now you're grasping at straws ... really?"

Cohen really wanted to know what Heather Locklear had to do with all this, but neither would elaborate further. "You know," Rinna told Andy, "Google it. Just Google it." Denise was beside herself, telling Lisa, "That is low."

Richards and Locklear were reportedly friends when Denise was married to Charlie Sheen and Heather was married to Richie Sambora. After they both divorced their husbands, Richards started dating Sambora -- and was adamant at the time that nothing happened between them while he was still married to Locklear.

Coincidentally, Glanville also mentioned Locklear during a recent appearance on "Watch What Happens Live," claiming the "Melrose Place" star reached out to her as RHOBH aired and said she, too, "had a cease and desist from Denise" in the past. Heather hasn't addressed the claims, but a source confirmed to PEOPLE that she and Brandi did text recently.

At end end of the hour, Richards shared her final thoughts on the reunion.

"I came here today to resolve things with the women and I feel like some of the women don't want to do that and move forward and that was something that I really wanted to do," she said. When asked if she felt like she wanted to be friends with the women, she added, "Some of them, yes."

While Rinna said there's nothing she would change about the season, she said she was "very sad" her friendship with Richards has seemingly come to an end. "It's too bad that we are where we are," she added.

The episode ended with all the women doing a virtual toast -- with Denise throwing back one final Casamigos Reposado.