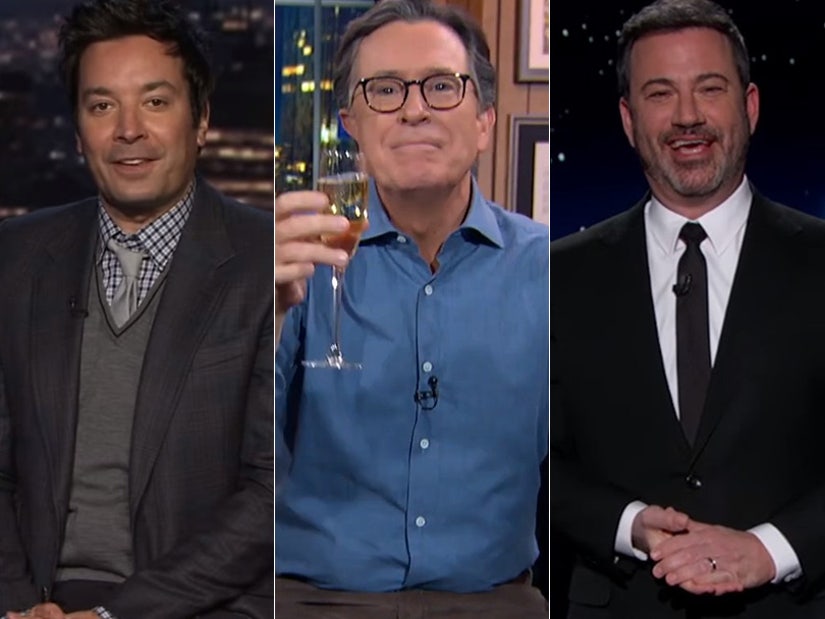 "It's a very different presidential speech than we're used to. White supremacists were like, 'No shout out? What the hell, man?'"

As the news was announced on Saturday, with major outlets finally projecting Joe Biden as the winner of the presidential election, the late-night hosts had to bite their tongues and hold their breaths.

In fact, exhaling after a tumultuous four years was a common theme among them on Monday night as they toasted and celebrated Joe Biden and Kamala Harris' historic victory, as was taking a look at the president's reaction to the result -- rather, his denial of it.

They couldn't help but notice the outbursts of celebration in the streets not only across America but in nations around the world -- which is not at all a common reaction to a presidential election -- as well as the fact Trump was on the golf course when it happened.

And then there was Rudy Giuliani's Four Seasons (landscaping company) presser to talk about all the dead people in Philadelphia voting and other unfounded conspiracy theories and allegations the Trump team is cobbling together as part of their legal strategy.

The also acknowledged that while this might be a day of celebration for about 75 million people, it by no means means the hard work in front of the nation is over. Covid is spiraling out of control again, the deficit is at record highs and we have never been more divided in our history except that one time we were literally divided.

A Late Show with Stephen Colbert

"Our long national nightmare is different. So we can’t get complacent," Stephen Colbert cautioned. "We have to put our heads down and keep doing the work."

He then smiled and added, "Starting tomorrow."

The "Late Show" host kicked off his monologue pouring a glass of champagne for his wife and himself, toasting to that difference. "Finally, after four years, Americans can exhale," he said. "Unless you’re near other people, then please don’t because of the pandemic."

In taking note of all the celebrations happening around the nation once Biden was projected the winner, Colbert took a dig at Trump's claims that his are the biggest rallies of all time. "That is the biggest presidential rally of all time," said Colbert.

"Not a good sign when the majority of Americans react to you losing your job the way they did to us getting Bin Laden," he joked, doubling down on his digs by saying, "It feels like America is, what’s the word, great again."

Later, after seeing Biden in his speech talking directly to Trump's supporters, acknowledging that he understands their pain and disappointment because he's been there, having lost his own run at the presidency more than once. Nevertheless, he vowed to work hard for them, too.

"Wait a second. Admitting that you’ve ever lost," Colbert responded to the footage, a little confused. "Why isn’t he talking about shower pressure and how windmills give you cancer. He didn’t even wish an accused child sex trafficker well. That is so unpresidential."

Fallon poked fun at that, as well, how Americans have been conditioned under four years of Trump to expect an entirely different type of speech and behavior from our commander-in-chief than Biden has been putting on display thus far.

"Americans are so damaged from the last four years, they’re like, ‘When’s he gonna call somebody an idiot? When’s he gonna insult somebody? Come on, spice it up, man!’" Fallon said. "It’s a very different presidential speech than we’re used to. White supremacists were like, ‘No shout out? What the hell, man?’"

Fallon was all smiles, too, saying that the announcement was, for those 75 million Americans, "like the greatest unboxing video of all time."

I will always remember where I was when I heard the news," he said soberly. "I was sitting in front of the TV like I had been the last five days."

As for Rudy Giuliani's landscaping presser -- we still don't know how or why that happened -- Fallon could already picture Trump asking his lawyer, "Did you get fooled by Borat again?"

But easily Fallon's finest moment came when he revealed that the Trump team had finally found the perfect person to break it to the president that he lost this election. Let's just say that NBC has the rights to footage of a certain reality star's television show.

It's well worth watching, coming at the end of his monologue.

Jimmy Kimmel offered his own help to Trump with a montage of concession speeches from every losing candidate from 1992 to the present -- including Trump rambling on about how the election was stolen from him.

"Of course, they aren’t questioning the results of the races in the House and the Senate, even though they’re on the same ballots," Kimmel said. "Why would the Democrats have cheated and stolen the presidency, but given up the Senate and House seats on the ballot. Is it like when you cheat on a test and you purposely get a few wrong to throw the teacher off the scent?

As for the president's reluctance to accept what certainly seems inevitable, Kimmel joked that he understood why it was so hard. After all, "this is the first time he's failed at anything." Then after a pause, he went on, "except..." and listed off a string of Trump failures.

"They keep saying give him time, and we will give him time," Kimmel said. "He’s got until January 19th and then he’s out. Time’s up on the 20th."

After watching Trump refuse to concede and continuously declare false victory, Kimmel made a request to whoever is in charge of such things.

"Please don’t hang his portrait in the White House," he said. "Just smash a mango on the wall instead and put his name under it."

Trevor Noah was celebrating with his late-night brethren, but admitted that he actually felt kind of bad for how and where Trump found out that major media outlets had called the election for Joe Biden.

In particular, he felt bad for Trump over the footage of the presidential motorcade returning to the White House from his golf excursion after he'd been projected the loser to find a sea of people jeering and booing him.

"No matter what you think about Trump, I think we can all agree that that is a terrible way to find out that you’re fired," he said. "It’s bad enough for your boss to tell you to clean out your desk, but can you imagine if on the way to your desk the entire office was lining the hallways to boo you?"

He also marveled at the tone of Biden's victory speech, sitting so differently from every speech Trump has given. "After four years of listening to Trump, a normal presidential speech was weird," he admitted. "I was like, wait, we’re not blaming anything on Hillary? Nothing?"

"You know you were a bad president when people were celebrating and old, white centrist like he was the sunset at Burning Man," said Seth Meyers after showing some of those nationwide celebrations.

While he said it was great Joe Biden was elected, he also noted that it "statistically gives him a 100 percent chance of getting the coronavirus."

As for Kamala Harris becoming the first person of color elected Vice President, Meyers quipped that it's "a pretty big jump from no color at all," sharing a very pasty-looking picture of current Mike Pence.

He also took "A Closer Look" at the fact that it's the GOP actually trying to "steal the election," despite their claims its the Democrats.

Meanwhile on "Conan," Conan O'Brien kept it simple on his show, simply sharing a "collective sigh of relief" with all of America, though perhaps not realizing just how powerful that many sighs could be. You can check out those clips below: