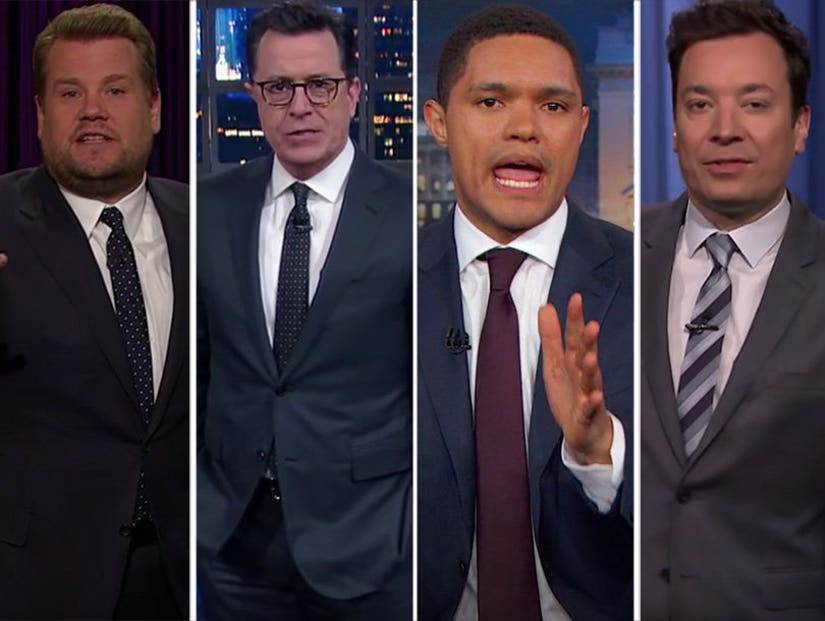 Late-night TV had a field day over Attorney General Jeff Sessions' Thursday recusal from the investigation into alleged ties between the Trump campaign and Russia with each mocking the administration for it's shady dealings.

"[My staff] said that since I had involvement with the campaign, I should not be involved in any campaign investigation. I have studied the rules and considered their comments and evaluation. I believe those recommendations are right and just. Therefore, I have recused myself in the matters that deal with the Trump campaign," Sessions said during a Thursday press conference>

"Russia is Trump's herpes," Trevor Noah said. "What makes it worse is that he lied under oath while interviewing to be the guy who prosecutes people for lying under oath."

Take a look at what else "The Daily Show" host and others had to say about Trump in the videos below.

Reserving judgment, the "Daily Show" host tried to give Sessions an honest shake before jumping to conclusions during his show on Thursday night, but it didn't last long.

"I'm sorry, that is not a decent excuse," Noah said, referring to Sessions' claim that he "wasn't aware" that he'd met with Russian officials during or after the Trump campaign. "How do Trump's people keep forgetting that they've met with Russians? Let me tell you something, if you meet a Russian, you will remember that shit. The moment they say, 'Hello,' it's an immediate fight-or-flight response. You don't forget that."

See more: Why Conan O'Brien Thinks Comedy Can Save the Government (Video)

Corden compared the Trump administration to a fictional Jason Bourne movie titled "Do You Think We Were Bourne Yesterday."

"Yesterday was the first day of Lent and a lot of people give things up," Corden said. "If you saw the news today, you'd know that the White House just gave up any shred of credibility," he said, referring to Sessions' admission that he met with Russians but didn't discuss the election with them.

"That's like your wife finding out that you went to a strip club and you tell her, 'No no, it's cool; I didn't look at any of the girls," Corden joked.

Celebrating Trump's narrative-changing performance on Tuesday in a tongue-in-cheek way, Meyers said that the administration's "latest bombshell" set their progress back.

"Obviously the timing of this latest bombshell was not good for the White House, as they were trying to enjoy the success of Trump's speech on Tuesday," Meyers said. "Now look, there could certainly be legitimate reasons for Sessions to meet with the Russian ambassador -- it's that he withheld that information from Congress and that's a problem."

"Look, we need a full and independent investigation to get to the bottom of this," Meyers said, "and it's clear that Jeff Sessions cannot provide that."

Colbert on Thursday night revealed why he thinks there's no need for Sessions to recuse himself from the Russia Investigations.

"You don't have to recuse yourself," Colbert said of Sessions' speech admitting that he had met with Russians ... but didn't discuss the election with them. "Because you've already f--ked yourself."

"Sessions' office had an explanation, they say that Sessions didn't lie. They say he wasn't meeting Kislyak as a surrogate, he met with the Russian ambassador in his capacity as a member of the armed services panel."

"'Honey, I wasn't having sex with her as your husband,'" Colbert said, imagining it was a dialogue between a married couple. "'I was humping her in my capacity as a member of the armed services panel. Totally different.'"

Fallon outright suggested that Sessions resign and seek other employment.

"'The World's Oldest Living Boy' at a traveling carnival or starring in the live Broadway version of 'The Elf on the Shelf,'" were some of the late-night host's suggestions.