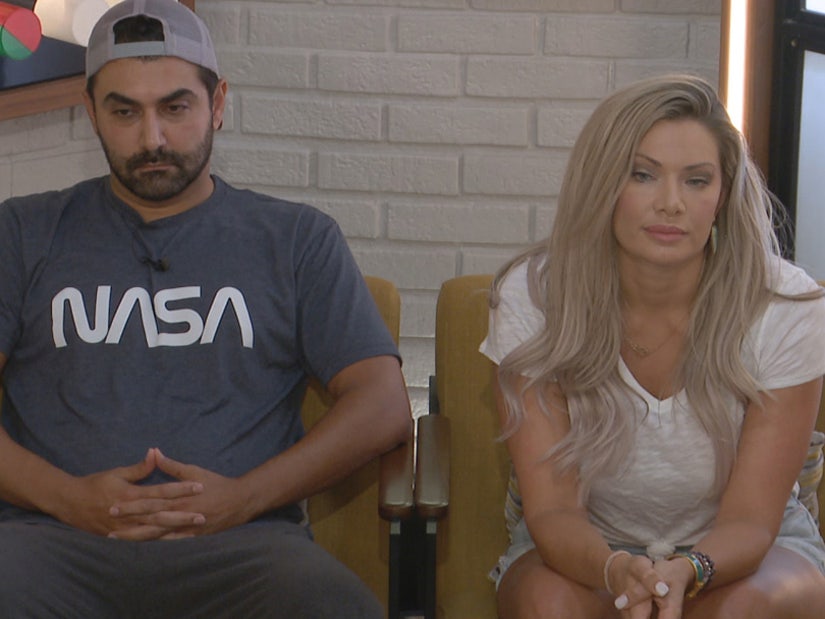 One player gets personal and nasty in their farewell message to the evicted Houseguest.

When you're a "Big Brother" legend, you start the game with your back against the wall, and that was certainly the case for both Janelle and Kaysar.

In their third time playing together -- including the previous "All-Star" season -- the duo again found themselves block buddies this week. In those two seasons, Kaysar wound up coming in 10th while Janelle went on to 3rd place finishes. 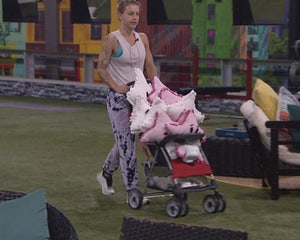 This time around, one of them won't make it as far as any of those finishes, and the other is really going to have their work cut out for them to make it all the way to 3rd. The question is if the house will still be as threatened by one of them as they were by the two of them.

Amazingly, though, with two legends on the block and one of them the undisputed "Queen of Big Brother," Janelle and Kaysar were not the only huge story in this episode.

From legends to rookies, we quickly saw what happens when you put a newb in with vets.

After spending weeks in the house last season (post-eviction) and really showing an aptitude for insight into the other players, strategies and what was going on, we totally did not expect David to be so awful at it when it was his turn to play.

It would seem that the only way to get good at this game is to play this game, because the one guy who hasn't played it is easily playing the sloppiest game. He doesn't know how to keep his mouth shut, how to let things roll off of him and how to build and keep trust.

As a viewer, that makes him a very interesting wild card as he can run around and blow everyone's game up, as he started doing this week when he decided he should tell Da'Vonne and Bayleigh that Tyler and Cody told him Day was trying to flip the votes against him. 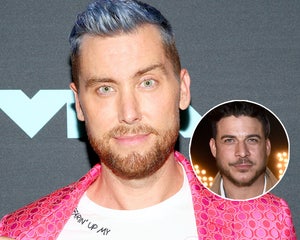 Lance Bass On Where He Stands With Jax Taylor, Talks Shake Up On Vanderpump Rules (Exclusive)

Now, there may be some truth to that as David tried to shut her down even as she was campaign hard for him. Da'Vonne and Bayleigh are playing very aware that he is the only Black man in the house and no Black man has even made jury, so they're trying to change that.

It's a powerful statement of solidarity, and yet David can't seem to fully wrap his head around that fact. Nor can he grasp that if they're advocating on his behalf, maybe throw them a little bone of trust -- Da'Vonne, in particular. Honestly, he plays like he's scared of her.

Then again, his strategy thus far has been deer-in-headlights. He looks overwhelmed all the time. All! The! Time!

Day and Bay are not going to keep fighting for him, and after he blew up Tyler and Cody's game -- and then told them about it -- they don't have his back, either. "Big Brother" and even the other Houseguests appear to be trying to do right by minorities this season, but David is not making it easy.

Look, it was not a surprise who got evicted, but at least one of the votes to evict left Julie Chen totally flabbergasted, mouthing "What?" silently to the camera. It came early on, too, giving a glimmer of hope to our girl, Janelle.

It wasn't to be, so only time and the live feeds will likely tell why Dani voted to evict Kaysar. We suspect Enzo did it to be "hinky" again, as he was throwing away a vote last week, but is that why Dani did it?

Before we even had time to fully process that, we got to see why Janelle is the queen and Nicole F is ... well, a bit of a "mean girl" this season. Janelle has done plenty of fighting in her "Big Brother" days, but Nicole really seemed to go low this season.

And then she wrapped up her Janelle experience -- unless there is a Battle Back comp -- by uninviting Janelle to her wedding as part of her farewell message. Probably the nastiest part of it is you can see that little smirk on Nicole's face as she says these catty things, so enjoying this little power trip.

Nicole tried to be cute and disinvite Janelle from her wedding during her goodbye message. Janelle however, gave ZERO fucks 🤣 #BB22 pic.twitter.com/vIqbz3opLA

That said, while Nicole's intent was clearly to savage and devastate Janelle on national television, she watered herself down in the delivery, weakening her own attempt at a vicious swipe. It just came across as kind of lame and pathetic.

Janelle, though, queen that she is, had absolutely no response to Nicole's message whatsoever. She was busy reeling with the news that Memphis, with whom she'd confided, was a part of that alliance she sussed out -- and told him about!

So while Nicole was worried about getting one last jab in on Janelle's way out of the house, Janelle was more worried about her actual friend, Kaysar, still in the house and probably going to trust someone he shouldn't in Memphis. Class versus 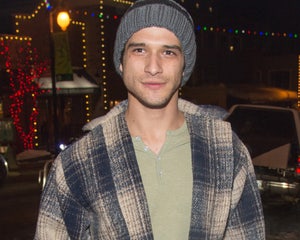 Daniele Briones rises to the top by default, more because the power duo running the house got dinged by David. Nevertheless, she is playing one of the most interesting social games we've seen, kind of bringing out the darker side of the other players while they confide in her. It's dangerous, but working so far. It helps she's already well-aligned as she plays. Grade: A

Cody Calafiore rises slightly above Tyler Crispen simply because David painted the latter as more the ringleader in the whole Da'Vonne fiasco. Plus, with Janelle gone, these are now the two biggest targets in the house. They're perfectly aligned and have held power all along, so the next HOH win will be key in maintaining status quo or flipping the whole house. Grade: A-

Enzo Palumbo and Christmas Abbot are playing the quiet, social game. But they're doing it from within a power alliance, which is way better than just floating. Grade: B

Da'Vonne Rogers and Bayleigh Dayton are now the only highly visible power duo in the house. They're also starting to play a little more aggressively, but they may find themselves at a pivotal point in their game. And with David potentially blowing up the Slick Six trust, things could get interesting real quick. But at least they're aware and on it. Grade: B-

Nicole Franzel is mostly laying low, other than picking fits with Janelle. If she stops now that Janelle is gone, she could be okay for awhile. If she chooses a new target, she could wind up making a target of herself. For now, though, she's strongly-aligned -- if a little "mean girl." Grade: B-

Kevin Campbell talked a bit of strategy this week, which was nice to see, but he's clearly playing the lay low game after a Week 1 nomination. How long will that work, though? Grade: C

Ian Terry revealed this week that he is intentionally playing "dumb" as part of his own lay low strategy. It's working as he has not been on anyone's radar since the beginning when he was being considered solely as a former winner. It's good to see that his head is in the game, but he's still way on the outside of pretty much everything happening. Grade: C

Memphis Garrett is not doing himself any favors, playing a wild card game. And now that Janelle is out of the house, he's a huge challenge threat. That said, Tyler waffled on keeping Janelle as a shield for himself, which could be good for Memphis. But he's burning trust everywhere. Grade: C-

David Alexander is not good at this game. He needs to know when to shut up, when to calm down and when to shut up. Did we say shut up twice? Yes, we did. That's how much he needs to do it. Grade: D+

Kaysar Ridha is a lone wolf now, and playing the game for the first time without Janelle. It's uncharted territory, so it remains to be seen how he will adapt. If he tries to get revenge, he'll be in trouble. If he tries to align with Memphis, he may be in trouble. If he adapts, lays low and tries a new approach, he might last a bit longer. But he has no friends or allies. Grade: D

Janelle Pierzina was the queen and the new-school players wanted to be the ones to take her out early. We saw it happen on "Survivor" this past season when Sandra and Boston Rob were taken out. The younger players love that clout. Not much she could do when no one wanted to give her a chance. Grade: F 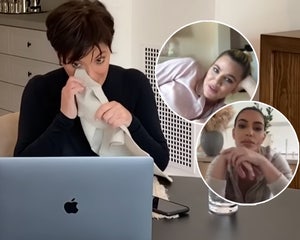 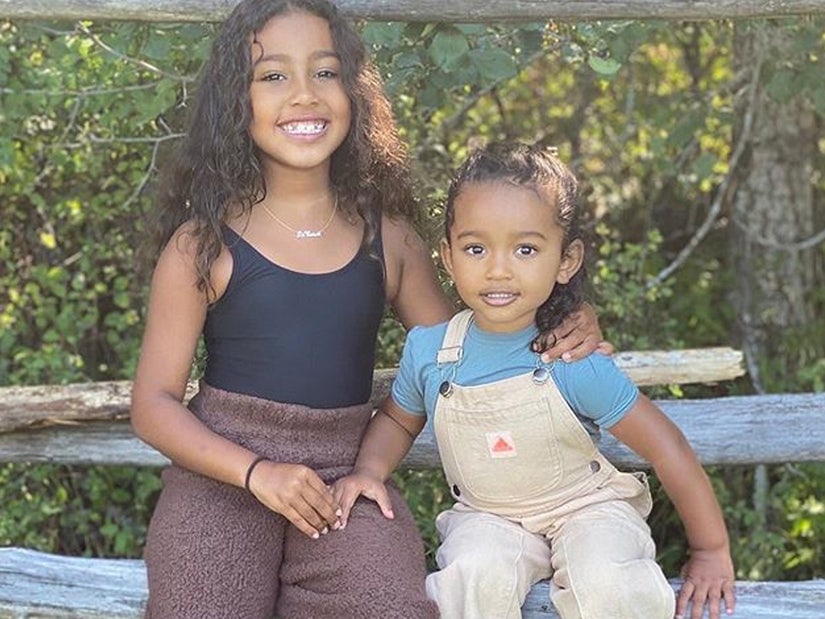